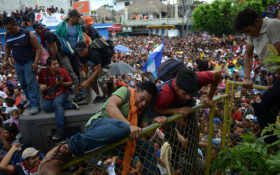 Leaders of one of the illegal migrant caravans massing at the southern U.S. border have an offer — American taxpayers must pay them $50,000 a piece in reparations, and they’ll go home.

Either that, or they’ll force their way into the country.

Alfonso Guerreo Ulloa, an organizer from Honduras, told The San Diego Union-Tribune that $50,000 in cash, per illegal migrant, was what the U.S. owed.

“It may seem like a lot of money to you. But it is a small sum compared to everything the United States has stolen from Honduras,” he said.

Remember: The mainstream media said these caravans were filled with women and children just trying to flee violence. The media insisted they weren’t just looking for a handout.

Ulloa and approximately 100 migrants delivered the ransom demand, among a list of others, to the American consulate in Tijuana, Mexico on Tuesday.

“The group’s letter criticized American intervention in Central America,” The Union-Tribune reported. “They gave the U.S. Consulate 72 hours to respond. They said they had not decided what to do if their demands were not met.”

“I don’t know, we will decide as a group,” Ulloa told the paper.

A second letter from a seperate group arrived later in the day and demanded the U.S. speed up the process for asylum seekers. The letter asked the border patrol to begin admitting 300 or more migrants a day into the San Ysidro Port of Entry in San Diego.

According to Fox News, around 40 to 100 are currently being processed daily.

Of the thousands of illegal migrants that orginally massed at the U.S.-Mexico border, many have moved on from Tijuana. Some remain and are hoping to be granted asylum. Many others have splintered off from the group and are attempting to cross the border illegally.

“A lot of people are leaving because there is no solution here,” said Douglas Matute, 38, of Tijuana told Fox News. “We thought they would let us in. But Trump sent the military instead of social workers.”