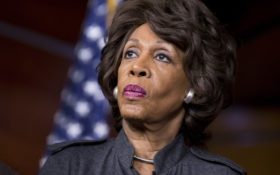 Rep. Maxine Waters, D-Calif., is so trapped in the “Trump Derangement Syndrome” that she’s siding with Iran over the U.S. military.

Waters says the U.S. military is provoking Iran needlessly and blaming our armed forces for the recent rise in tensions in the Middle East.

On Sunday, Waters said Trump deserved zero credit for stopping a retaliatory missile strike against Iran after the Islamic country attacked and shot down a U.S. drone.

Waters repeated the Iranian Revolutionary Guard’s lie that the drone had violated Iranian airspace — despite the U.S. military having evidence the drone was operating legally over international waters.

Even the liberal media backs the U.S. military’s version of events and says the drone was found over international waters.

She also asked why the U.S. was bothering to conduct surveillance of a hostile foreign power and accused Trump of provoking the Ayatollah.

Trump, you get no credit for so-called stopping the strike against Iran. Why was the unmanned drone in Iran's airspace? Why the surveillance? Don't provoke and then pretend innocence.

Critics jumped on Waters for the anti-American statement. Iran has funded radical Islamic terrorists for years and siding with them is incredibly naive, said critics.

“This is a shocking comment from a House Committee Chairwoman,” Rep. Dan Crenshaw, R-T.X., said in response. “She is literally repeating the lies of the Iranian regime. What a disgrace.”

“Maxine Waters’ hate for Trump runs so deep that she is willing to take Iran’s side over the word of our military,” he continued.

Tensions between the U.S. and Iran have risen in recent weeks as an increasingly desperate Iranian government has pushed back against harsh financial sanctions.

The U.S. has accused Iran of funding radical Islamic terror groups in Syria and around the Middle East. According to intelligence experts, Iran has sought to destabilize the region to expand their sphere of influence.

Trump issued an icy warning to the Ayatollah and Revolutionary Guard leaders on Tuesday.

The president said that further aggression by Iran towards U.S. military assets will be met with “great and overwhelming force.”

Iran leadership doesn’t understand the words “nice” or “compassion,” they never have. Sadly, the thing they do understand is Strength and Power, and the USA is by far the most powerful Military Force in the world, with 1.5 Trillion Dollars invested over the last two years alone..

….Iran’s very ignorant and insulting statement, put out today, only shows that they do not understand reality. Any attack by Iran on anything American will be met with great and overwhelming force. In some areas, overwhelming will mean obliteration. No more John Kerry & Obama!

“Know that the United States will remain steadfast in undertaking the actions that the president laid out in this strategy to create stability throughout the Middle East, which includes the campaign we have, the economic campaign, the pressure campaign that we have on the Islamic Republic of Iran,” Pompeo said recently.

FLASHBACK: Maxine Waters had a public MELTDOWN when she heard… (video)