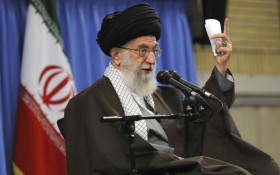 A senior Iranian official is accusing the United States of not living up to its side of the nuclear agreement that Washington and five other world powers signed with Tehran, saying it is trying “scare off” foreign companies from doing business with the Islamic Republic.

Araghchi spoke to reporters Friday after a review of the pact by the seven nations that signed it. The move comes at a time of high tensions between Tehran and Washington that threaten the nuclear pact’s continued existence.

The U.S. administration announced new, non-nuclear sanctions this week and warned Tehran it would face consequences for breaching “the spirit” of the nuclear deal with world powers.