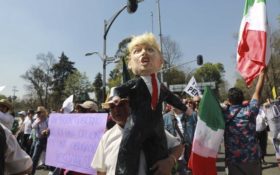 When President Donald Trump sent his top diplomats, U.S. Homeland Security Secretary John Kelly and Secretary of State Rex Tillerson to Mexico City, the goal was to talk cooperation and the enduring partnership between the U.S. and its southern neighbor.

But Democrats had other ideas and organized thousands of foreign nationals in an angry anti-Trump protest in the city.

And they used U.S. taxpayer funding to do it.

The Mexico City demonstrations were organized by Democrats Abroad, the expat branch of the Democratic Party — and the organization’s funding relies on YOUR tax dollars every year.

While the White House diplomats acknowledged generally that the U.S. and Mexico are in a period of disagreement, their political rivals in America were doing everything in their power to widen the fracture.

It seems Democrats are willing to do anything these days, no matter how immoral.

Where were these Democratic Party-funded foreign protests when millions of Mexicans were being deported under President Barack Obama?

They didn’t exist, of course.

The outrage from the liberals only began when Trump promised he was “getting really bad dudes out of this country at a rate nobody has ever seen before.”

Democrats want to stop America from moving forward — and they’re sending your tax dollars in Mexico to prove their point.