Outrage! Democrats just SPIT IN THE FACE of America - The Horn News 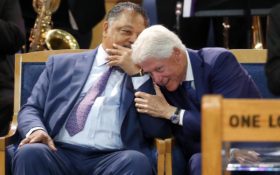 The holiday season is a time for coming together — and Americans of all parties should be able to denounce someone who goes to a hostile country and chants, “Death to America!”

But the Democrats can’t, or at least they haven’t. A disturbing number of leftists in high places — including the former president of the United States — said absolutely nothing when one of their allies promised to work with Iran against his own country.

Nation of Islam leader Louis Farrakhan’s latest controversy came when he led crowds of Islamic extremists in Iran in a chant of “Death to America!” It’s disturbing, and you can watch the footage right here:

As bad as that was, Farrakhan wasn’t even close to finished yet. He stood up in Teheran and promised to work with the terrorist-sponsoring regime to defeat the United States.

“I understand how the enemies have plotted against the Iranian people,” Farrakhan said, talking about the United States and Israel, “and I would like to stay alongside you to stop their plots.”

Multiple Democrats have cozy relationships with the extremist cult leader. Seven different Democrats in office met with Farrakhan — privately, and while they’re in office.

Some of them have ties going back decades.

Ellison — the former Deputy Chair of the Democratic Party who has just been elected the Attorney General of Minnesota — was a member of the Farrakhan cult.

“Keith was in the Nation (of Islam) in 1995,” Farrakhan announced publicly, after Ellison had safely made his way into real political power. “He was selling The Final Call newspaper. He was a beautiful brother.”

None of these congressmen should have been surprised by Farrakhan’s anti-American hate speech. He has a decades-long history as a racist and anti-Semitic hatemonger. He’s said “Jews are my enemy” and called Adolf Hitler a “very great man.”

He once said that “white people deserve to die.”
After an outburst earlier this year, where he called Jews “termites,” the Republican Jewish Coalition called on the seven Democrats to resign immediately.

The president’s son, Donald Trump Jr., even drew attention to them on Twitter:

I guess all the denouncing from the Dems who have met with him must be lost in the mail??? I’m sure they’ll be all over it someday???? https://t.co/p5Tr5hqeJW

Under intense pressure, some liberals publicly denounced Farrakhan… some, but not all!

Four of them refused to say a word — and some of them may hold powerful positions in the next Congress.

Waters, who attended a Nation of Islam event in 2005 and was praised by Farrakhan as “our great congresswoman” has not spoken out on his recent statements.

Clyburn, who spoke alongside Farrakhan in a 2011 event, refused to condemn Farrakhan with his fellow Democrats this year …and now he is gearing up to move into a major new leadership position.

Clyburn will be the number three Democrat in the House come January. He’s running unopposed for Majority Whip — with the blessing of House Minority Leader Nancy Pelosi!

Green and Carson haven’t had a word to say, either.

Even former President Bill Clinton who sat just a few seats away from Farrakhan at singer Aretha Franklin’s funeral has kept mum about the Nation of Islam leader’s recent statements.

Saying nothing while Farrakhan stands on foreign soil, shakes hands with terrorists, and promises to fight the Great Satan back home should get his Democratic congressional supporters run out of office.

Farrakhan’s supporters need to resign, or be fired, immediately.