OUTRAGE! CNN called White House a… what!? - The Horn News 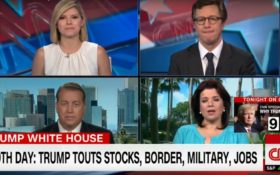 CNN commentator Ana Navarro is supposed to be the Republican voice to counter-weight the liberal network’s hosts — but her “conservative” claim is laughable, even her fellow panelist can’t keep a straight face.

What she said Monday, though, went too far. Navarro compared the firing of leakers in White House under President Donald Trump to “quickies” in a “Las Vegas brothel.”

We guess sexist comments are okay if they’re coming from CNN?

Asked to grade the Trump administration’s first 200 days in office, Navarro — an outspoken supporter of former Florida Gov. Jeb Bush during the 2016 primary — said it would be generous to even give a “C- or a D”

“In 200 days, he’s had very few good days,” Navarro said before launching into a nasty, sexist tirade against Trump.

“He’s failed at his signature promise of replace and repeal, his White House has had more people go in and out for quickies than a Las Vegas brothel,” Navarro said while the other panelists laughed out-loud.

“The chaos that has ensued is absolutely insane! He keeps fabricating things and outright lying, he keeps tweeting like a deranged person! He has caused international incidents. The leaks out of his White House are like cheesecloth. So, no. I don’t think you can say this has been a good 200 days,” Navarro concluded.

Navarro has been one of the most outspoken critics of Trump since the election, and that doesn’t seem to be letting up.

“I’m not even going to go into the brothel comment,” Host Kate Bolduan laughed after Navarro was done her rant.

Of course not — because it’s disgusting.

Imagine if a liberal commentator had gone on Fox News and said the same things about former President Barack Obama? If someone had dared compared the White House to a house of prostitutes while former President Barack Obama’s family lived there? Imagine if conservatives howled with laughter while a Obama’s adminstration was called “deranged” and giving out “quickies”?

There would be riots on the streets!

But, because it’s a CNN commentator speaking out on the Trump family, this kind of nasty behavior is allowed?