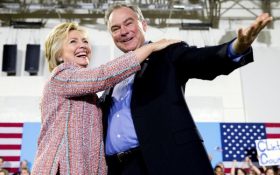 Just days later, he’s announced his priority for the first 100 days of the Clinton administration — give citizenship across the board to every single illegal immigrant in the United States. And it would cost taxpayers big time.

That’s according to The Washington Times, which reported that “a new Clinton administration would pursue a bill to legalize illegal immigrants in ‘the first 100 days’ of her tenure, vice presidential candidate Tim Kaine told Spanish-language network Telemundo in an interview Monday, presenting a deep contrast with Republicans.”

The cost of such a plan has been analyzed previously by The Heritage Foundation, a conservative think tank that concluded in a 2013 study that blanket legalization would cost tax payers approximately $6.3 trillion.

Republican presidential nominee Donald Trump recently derided Kaine as a “weird little dude” and a political “hack” and argued that Clinton made a mistake when she chose him.

Some critics on the left agree, and have suggested a potential “Kaine Mutiny.”

Kaine is set address the American public for the first time as Clinton’s running mate on Wednesday night at the Democratic National Convention. The speech will offer a window into how well received — or not — far-left Democrats will be towards him.