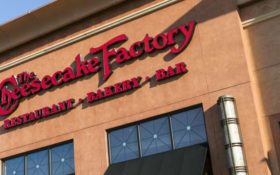 The Cheesecake Factory has come under fire after reports surfaced that employees from their Miami restaurant harassed and threatened a young black man for wearing a “Make America Great Again” hat.

On Sunday, Eugenior Joseph visited the chain restaurant and was seated at a table when “a woman who worked at the restaurant walked up to him and started pointing at his hat, signaling for the other employees to come over,” according to The Daily Wire.

Suddenly a dozen employees then approached Joseph at his table to comment on the hat and harass him for his support of President Donald Trump.

“Her finger was literally on top of his head, we were all looking at her like ‘what is happening?'” one witness told The Daily Wire.

Some witnesses claim that the employees got into the victims face and threatened to punch Joseph. Other witness accounts claim that Joseph, a black man, was called a “n****r” for wearing the MAGA hat.

“So then all the employees started standing there, saying things out loud, like, ‘I’m going to knock his head in so hard his hat’s going to come off,” the witness continued.

According to The Daily Wire, one of the employees clinched his fists and gave Joseph dirt looks indicated he wanted to have a brawl.

“He got behind me and another coworker came by and they were staring at each other and he fist bumped him and then he started looking at me, balling his fists, smacking his fists, trying to scare me,” Joseph said.

Joseph said that even as he made his way to the bathroom, employees continued to mock him.

“I got up and went to the restroom, my girlfriend followed me, and as we were walking back, a group of [the employees] came out from the back and they just started clapping and yelling, and just screaming things at me,” Joseph says.

According to reports, a woman in the restaurant was so upset by the horrific scene that she took medication to calm herself down.

“Multiple witnesses said that as the family exited the restaurant the manager followed them out and told them that some of the employees admitted to their actions and that one of the employees had been sent home,” The Daily Wire reported.

The Cheesecake Factory has since responded to the outrage stating, “No guest should ever feel unwelcome in one of our restaurants, and we are taking this matter very seriously,” said Alethea Rowe, the company’s senior director of public relations. “Upon learning of this incident, we immediately apologized to the guests in person. The individuals involved in the incident have been suspended pending the results of our investigation.”

Joseph admitted that while he considers himself new to politics, he said he wears the hat because he thinks Trump “is a really good president.”