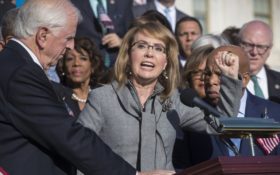 It’s no secret that establishment Republicans do not like President Donald Trump.

But siding with Democrats and attacking the second amendment rights of Americans just to score cheap political points is an all-time low.

What does diabetes have to do with Mediterranean stuffed chicken? (sponsored)

The comments from lawmakers including the No. 2 Senate Republican, John Cornyn of Texas, marked a surprising departure from GOP lawmakers’ past antipathy to gun regulations of any kind, legislation proposed by Sen. Dianne Feinstein, D-Calif.

It’s a direct response to Trump’s White House statement that now was not the time for new regulation and debate.

“I own a lot of guns and as a hunter and sportsman I think that’s our right as Americans, but I don’t understand the use of this bump stock and that’s another reason to have a hearing,” Cornyn said.

Cornyn later said he’d spoken with Judiciary Committee Chairman Chuck Grassley, and that Grassley — an outspoken critic of Trump in the past — was interested in convening a hearing.

The devices, known as “bump stocks” among other names, are legal and originally were intended to help people with limited hand mobility fire a semi-automatic without the individual trigger pulls required.

The government gave its seal of approval to selling the devices in 2010 after concluding that they did not violate federal law.

Feinstein has a career-long history on the issue of banning guns. She authored an assault weapons ban that was in place for a decade before expiring in 2004, and said she had been considering trying to reintroduce that more sweeping legislation, as she’s done unsuccessfully after past mass shootings, including the one at Sandy Hook elementary school in Connecticut.

Senate Minority Leader Chuck Schumer urged her to go with a narrower bill that might be likelier to draw support.

Feinstein pleaded with the public to pressure Congress to consider her legislation after the horrific violence earlier this week when a gunman killed 58 people and injured hundreds at an outdoor concert that she said her own daughter had considered attending.

“Mr. and Mrs. America, you have to stand up, you have to say ’enough is enough,’” Feinstein said. “Why can’t we keep a weapon from becoming a military-grade weapon?”

The National Rifle Association, which has played a major role in exerting political pressure against gun curbs, did not respond to inquiries about its stance on Feinstein’s bill.

At least one Republican senator, Ron Johnson of Wisconsin, said outright he was prepared to vote to ban “bump stocks.” ″I have no problem in banning those,” he said.

Even so, asked Tuesday about “bump stocks” and whether they should be legal, McConnell, R-Ky., said it was not an appropriate time to be discussing legislation.

Ryan, R-Wis., made similar comments Wednesday in a radio interview on WISN in Milwaukee.

“What I don’t think you want your government to do is to lurch toward reactions before even having all the facts,” Ryan said. “Bad people are going to do bad things.”

In the House, meanwhile, Rep. David Cicilline, D-R.I., introduced a bill to ban the manufacture, possession, transfer, sale or importation of bump stocks. Rep. Dina Titus, D-Nev., whose district includes the site of Sunday night’s rampage, said: “The victims and families in Las Vegas don’t need an explanation about the difference between machine guns and firearms with bump stocks. They need action.”

Last year, after the mass shooting at a dance club in Orlando, Florida, Democrats commandeered the House floor to protest GOP inaction on guns, but while garnering headlines the tactic did not yield results. Shooting incidents involving lawmakers themselves, like at a baseball practice earlier this year where Majority Whip Steve Scalise was critically injured, have not changed the calculus.

Feinstein held out hope that this time would be different because of the scale of casualties and the weaponry “taking it into war.” And Manchin said that he planned to meet with Toomey on the background checks bill, but would not reintroduce it without significant GOP support, which he said “ain’t going to happen unless the president gives his stamp of approval.”

Trump visited Las Vegas on Wednesday but said “We’re not going to talk about that today” when asked about gun issues.