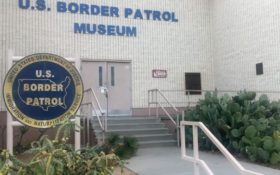 Alt-left activists fell to an alarming low with their latest stunt.

A group of about 50 vandals stormed the Border Patrol Museum in El Paso, Texas.

The sacred images of fallen victims who gave their lives in the fight for our nation’s sovereignty.

“Today a group of protestors invaded the Border Patrol Museum and defaced all of our exhibits including our scared Memorial Room,” Ham said. “Efforts to prosecute them will be pursued once damage is assessed.”

The vandals stormed through the museum, putting stickers on any and everything they could, including over the faces of real defenders of the country — protecting our nation from waves of drugs flooding in and sex trafficking over the borders. Their cause for the travesty? Two Guatemalan children who died recently. So they decided it’d be a good idea to insult fallen border officers who have nothing to do with the situation…

“They immediately spread throughout the museum, and displayed banners and began chanting and singing,” Ham said.

The group calls itself Tornillo: The Occupation. They reportedly live-streamed the incident online.

Take a look at the savage defacement below:

I’ll let you draw your own conclusions about the hypocrisy of their actions…???? pic.twitter.com/VUmMmwAIqO

Museum Director David Ham said that the museum is not-for-profit and has no political affiliation. In other words, the vandals vilified ordinary patriots trying to do their jobs. Not only does the desecration disrespect the dead, but it’s also ignorant of the grieving families.

All over a couple dozen stickers. Which, ironically, seems a little harmless. They’re just stickers after all, right?

“This group desecrated this room by placing 20 stickers throughout this room, including six on the wall with pictures of the fallen agents. The problem is the stickers have heavy-duty adhesive, and are extremely hard to remove without damaging the wall.”

And the items may never be fully restored.

Watch the activists enter the building below:

BREAKING! Direct Action: Reclaiming the border patrol museum and exposing the true violence of borders and border patrol. MISSING HISTORY: The museum shows a small scoped perspective of what is happening on the border. No where in the museum would you ever find the fact that the Border Patrol has been a problematic entity in its treatment of the indigenous people of this land and asylum seekers. Our reclamation of the space was to highlight the voices that were missing from this memorial and the human rights violations inflicted upon them. They died in border patrol spaces, they deserve to be remembered in border patrol spaces."Pedestrians were run over by agents. Car chases culminated in crashes. Some have drowned, others died after they were pepper-sprayed, stunned with tasers or beaten.But the majority of victims died from bullet wounds, including shots in the back. The bullets were fired not only by agents conducting border enforcement operations, but also those acting in a local law enforcement capacity and by agents off-duty, who’ve shot burglary suspects, intimate partners and friends.They are the largest federal law enforcement agency, with sweeping powers and a reach 100 miles into the interior of the US. But they have a worrying record — a Guardian investigation shows the federal government has paid out millions in compensation after a litany of deaths, abuses and negligence."-https://www.theguardian.com/us-news/2018/may/02/fatal-encounters-97-deaths-point-to-pattern-of-border-agent-violence-across-america?CMP=Share_iOSApp_Other -https://www.theguardian.com/world/2018/may/01/border-patrol-violence-us-paid-60m-to-cover-claims-against-the-agency?CMP=Share_iOSApp_Other "From 2005 to 2012, U.S. Customs and Border Protection (CBP) agents were arrested 2,170 times for misconduct, such as domestic violence and drunk driving, government inspectors found. CBP, which includes Border Patrol and customs agents, was also the target of 1,187 complaints of excessive force from 2007 to 2012. Since 2004, more than 200 agents have been arrested on corruption-related charges, including at least 13 under Trump. And a 2013 government-commissioned report found that Border Patrol agents regularly stepped in the paths of cars to justify firing at drivers, as well as shooting at rock-throwers, including teenagers on the Mexican side, with the intent to kill."-https://www.texasobserver.org/the-border-patrol-serial-killer-is-part-of-a-long-troubled-history/"SINCE ITS FOUNDING in the early 20th century, the U.S. Border Patrol has operated with near-complete impunity, arguably serving as the most politicized and abusive branch of federal law enforcement — even more so than the FBI during J. Edgar Hoover’s directorship."-https://theintercept.com/2019/01/12/border-patrol-history/#RevoLove #FreeThem #Libérenlos #hungerstrike #ELPASO9 #AbolishICE #waterislife #HumanitarianAidIsNeverACrime #liberty4patricia #niunamás #WeDoCare #amorYamistad #ReturnTheChildren #Liberty4Patricia @officialpatriciaOkoumou #pokoumou

Posted by Tornillo: The Occupation on Saturday, February 16, 2019

Just when you thought liberals couldn’t get any more insane… they start targeting our nation’s fallen heroes.