Liberal: “White people, give us your f-ing money” - The Horn News 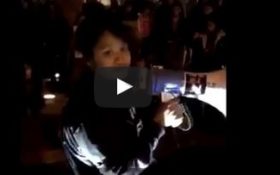 Shocking video of a rally against President Donald Trump in Seattle this weekend has surfaced in which a woman, claiming to be a preschool teacher and wearing a “Black Lives Matter” jacket, went on a racist tirade.

The unidentified women spends four minutes on a profanity-laced speech that called for the death of the president – and demanding white people surrender their property and money to people of color.

And the crowd actually cheers.

Could you imagine the mainstream media outrage if a person at a pro-Trump rally said things like this?

Oh, and it gets worse.

She concludes her nasty rant by telling the white protesters cheering her on to give up “your money, and just walk away. Because I ain’t trying to fucking talk to you.”

Just north, a well-known liberal activist in Portland, James Rhodes, was charged Monday by police in two separate instances of sexual abuse of children, one male and one female. Rhodes is the former leader of the anti-Trump “Portland Resistance” group and anti-cop “Don’t Shoot PDX” group. He served in the groups despite being a previously registered sex offender, according to the Oregon State Police.

Hylton had previously served 27-years in prison for the kidnapping, rape, torture and brutal murder of a gay man. Her victim’s decomposing body was found by police shoved into a footlocker.

How much more evidence do we need?