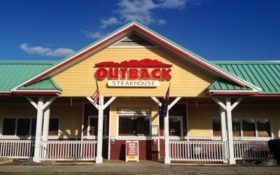 An Outback Steakhouse in Cleveland, Tennessee told a uniformed law enforcement officer that he must leave their restaurant on Friday — because lawful, uniformed officers must disarm themselves before coming through the door.

The manager of the steakhouse explained to the officer that the restaurant was a “gun free zone,” and that customers were complaining they felt unsafe.

The officer, Andrew Ward, used his Facebook account to explain what had happened — and his story quickly went viral — leading Outback to “apologize profusely.”

On Friday night, Ward detailed a night with his wife that went wrong. While on duty, he visited the steakhouse and the manager asked him to put his gun in the car.

Of course, with Ward being in uniform he was not allowed to place his gun in the car… that would be unsafe. But the manager left to make a phone call and then came back to kick Ward and his wife out of the restaurant.

Ward explained in his since-deleted Facebook post that, “There was another customer that was ‘scared for her life’ who was seated across from us. This customer also stated that she was afraid because ‘police are shooting people’ and this customer went on to demand to be escorted to her vehicle out of fear of being shot.”

What has this world come to that men and women that are dedicated to serving and protecting our country do not get the respect they deserve?

Ward also posted to his Facebook page that Outback will be sending him a $100 gift card.

No amount of money can fix this major mistake. And why would Outback think that Ward would ever visit their restaurant again?

Outback’s parent company, Bloomin Brands, released a statement, “We’ve always allowed uniformed law enforcement officers to carry their side arms inside our restaurants. A manager made a mistake and we have discussed this with her. We have contacted the guest personally and apologized.”

On Saturday, Ward told NewChannel9 that he considers the incident to be over.