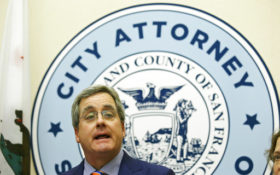 The ninth circuit court just attempted to sabotage President Donald Trump’s orders once again, and he’s not having it.

A federal judge on Tuesday blocked Trump’s attempt to withhold funding from “sanctuary cities” that do not cooperate with U.S. immigration officials. This is the second time this court has blocked an order from Trump relating to illegal immigration – the first occurring in early February when the court voted to block Trump’s temporary travel ban.

Trump took to Twitter early Wednesday morning and slammed the court, criticizing their high overturn rate, accusing them of “judge shopping” and showing no fear of the possibility of a Supreme Court showdown.

First the Ninth Circuit rules against the ban & now it hits again on sanctuary cities-both ridiculous rulings. See you in the Supreme Court!

Out of our very big country, with many choices, does everyone notice that both the "ban" case and now the "sanctuary" case is brought in …

…the Ninth Circuit, which has a terrible record of being overturned (close to 80%). They used to call this "judge shopping!" Messy system.

And he’s right about the court.

According to Politifact, The Supreme Court reversed 79% of the 9th Circuit’s cases between 2010- 2015, which legal experts say proves that the ninth circuit regularly misrules.

U.S. District Judge William Orrick issued the preliminary injunction in two lawsuits — one brought by the city of San Francisco, the other by Santa Clara County — against an executive order targeting communities that protect immigrants from deportation.

But Orrick has a past of his own, and his woven with Obama ties.

It was no surprise the Orrick was appointed by Obama in 2012, after The Federalist found that he, “raised at least $200,000 for Obama and donated $30,800 to committees supporting him.”

The White House released a statement condemning the ruling and citing a horrific crime that is proof sanctuary cities should not be allowed to thrive.

“Today, the rule of law suffered another blow, as an unelected judge unilaterally rewrote the immigration policy for our Nation,” the statement read, “The decision occurred in the same sanctuary city that released the 5-time deported illegal immigrant who gunned down innocent Kate Steinle in her father’s arms.”

“Sanctuary cities” is a loosely defined term for jurisdictions that don’t comply with immigration authorities.

The Trump administration says sanctuary cities allow dangerous criminals back on the street and that the order is needed to keep the country safe.