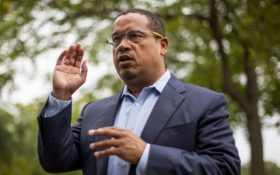 Yet top Democratic leaders rushing to “defend women” from Supreme Court nominee Brett Kavanaugh have been surprisingly silent. Wonder why?

Karen Monahan, who alleges that Ellison domestically abused her in 2016, posted her medical records on Twitter several times this week and claimed that Democratic leadership has set out to smear and isolate her from her own party.

Monahan’s medical records detail, “she is worried about retribution if she identifies him publicly” because Ellison and his friends are so powerful.

On Tuesday she tweeted, “Here is one of my Dr visits stating the abuse that occurred. It amazes me the measures people have to take for their humanity to be validated. ”

@MSNBC @CNN @CBSNews
Here is one of my Dr visits stating the abuse that occurred.
It amazes me the measures people have to take for their humanity to be validated. #metoo pic.twitter.com/7J0U5qwH4n

The records indicate, “She identifies the individual she was involved with as Congressman Ellison, and she is worried about retribution if she identifies him publicly.”

The date of the doctor visit is marked as Nov. 28, 2017 — proof that Monahan had reached out for help long before she took her accusations public.

In August, Monahan’s son first detailed the abuse story on social media, and later on Monahan confirmed her son’s reports. Ellison, who is running for Minnesota attorney general, has repeatedly denied any wrongdoing.

On Monday, Monahan tweeted, “Four people, including my supervisor at the time, stated that I came to them after and shared the exact story I shared publicly, I shared multiple text between me and Keith, where I discuss the abuse with him and much more.” Adding,”As I said before, I knew I wouldn’t be believed.”

One Twitter user had asked Monahan if Democrats had believed her story — like they had jumped to believe the accusations against Supreme Court nominee Brett Kavanaugh.

She replied, “No, they don’t. I’ve been smeared, threatened, isolated from my own party. I provided medical records from 2017, stating on two different Dr. Visits, I told them about the abuse and who did it.”

Why have the Democrats chosen to stand behind Kavanaugh’s accuser, but reject Monahan’s allegations?

Because the story does not fit into the liberal narrative. Monahan is accusing one of their own, while Kavanaugh is a Republican.

It is just further proof that Democrats will only support abuse victims if they fit into their narrative.

No wonder the mainstream media is ignoring it.