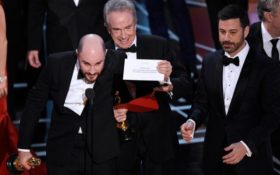 Sunday was the biggest night of the year for Hollywood — and the politically charged show ended in a total disaster.

As expected, the 90th annual Academy Awards was stuffed full of leftist millionaires lecturing Americans on what they should believe.

Safely behind 500 armed guards and police officers, liberal elites took to the stage for four hours to congratulate one another on being wonderful.

But outside of Hollywood, virtually no one tuned in.

In fact, the Oscars’ ratings hit an all-time low on Sunday. While the official numbers haven’t been released yet, preliminary data suggests the awards show was a total disaster for Hollywood, which relies on the big night to boost ticket sales.

According to Vulture Magazine, “preliminary data suggests the show’s overall audience will fall below 30 million viewers for the first time ever, finishing substantially behind 2008’s record low of 32 million. The year-to-year decline will also be substantial, likely at least 15 to 20 percent behind last year’s event.”

The experts at AdAge calculated an even worse result. Based on the data available, they predicted a 24 percent overall decline in ratings.

The decline was no surprised to Media Research Center Vice President Dan Gainor. Gainor told Fox News viewers weren’t surprised by the “divisive, left-wing politics” stuffed in the event, and chose not to tune in.

“The Tinseltown elite genuinely hate the people they expect will pay to see their movies and watch their TV shows. Why do we support them?” Gainor asked.

Will Hollywood finally get the message?

Did you watch the Oscars?