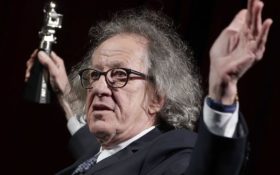 “Orange Is the New Black” actress Yael Stone alleges actor Geoffrey Rush engaged in sexually inappropriate behavior when they starred in “The Diary of a Madman” in 2010.

Stone says the “enthusiastically and willingly” replied to the texts from her fellow Australian actor when she was 25 and he was 59. Stone says she’s “embarrassed” by the ways she participated.

Stone says she was trying to manage “uncomfortable moments” without offending the star.

Rush won an Oscar for his role in 1996’s “Shine.” He is known to most audiences for his

In a statement , Rush says the allegations “are incorrect and in some instances have been taken completely out of context.”