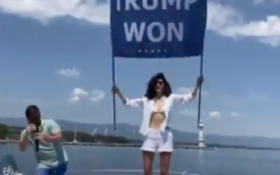 Many of the headlines on the President Joe Biden-Vladimir Putin summit were pretty standard.

But perhaps maybe the strangest news of all came from Osama bin Laden’s family.

According to reports, she was spotted on a boat in Geneva, Switzerland — where the summit took place — holding a pro-Trump flag.

But it wasn’t just any flag.

Based on multiple sources, the stunt which featured an organized parade of pro-Trump boats was also a protest of the highly anticipated Biden-Putin summit.

Noor, a Swiss national, is said to be a major supporter of former president Donald Trump.

The Hill says that Noor had been pulling protest stunts in the days leading up to the summit… so much so that police in Switzerland have threatened to arrest her.

For her political stunt, reports say the police arrived shortly after Noor had organized a pro-Trump boat flotilla which ended in a military boat circling the group of supporters.

Extended video of the incident shows Noor, holding the flag, in a standoff with the police.

Noor was interviewed by InfoWars after the encounter, where she gave a detailed account of what took place and what police threatened if she didn’t turn in her signs.