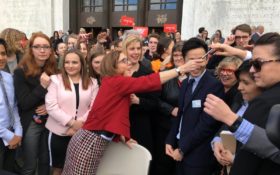 “Well done Oregon,” Democratic Gov. Kate Brown exclaimed Monday after signing the law on the steps of the state Capitol as some 200 people, including victims of domestic abuse and high school students, applauded and cheered.

State Sen. Floyd Prozanski, whose sister was fatally shot by her boyfriend, and Rep. Janeen Sollman, who fled her home as a child when her father was in a violent rage, hugged as they stood behind the governor.

The shooting at Marjory Stoneman Douglas High School in Parkland, Florida, that killed 17 people has created a wave of young anti-gun activists that has now reached cross-country into Oregon. Students from a high school in the Portland suburb of Lake Oswego traveled 40 miles to stage a gun-control rally in the state capital, Salem, Monday morning.

“We are empowered youth,” they chanted, while holding signs that read “End gun violence, our lives matter,” and “Together we can end gun violence.”

Brown came down from her office to speak to the more than 100 students from Lakeridge High School in Lake Oswego, who sat on a broad stairway underneath the Capitol rotunda. She urged those who are 18 to register to vote.

A couple of hours later, Brown met in her office with a dozen students from different schools. They agreed more needs to be done, including expanded access to mental health counseling to prevent unstable students from reaching the breaking point and committing violence.

The bill that Brown signed Monday closes a loophole in a 2015 law that excluded some abusers from the ban on buying or owning guns and ammunition, such as people who they don’t live with the partner they’re abusing or threatening, and those under restraining orders.

The measure was introduced before the Feb. 14, Florida shooting.