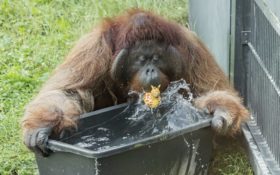 Orangutans at a Vienna zoo got buckets of water, lemurs in Rome enjoyed fruit icicles and a polar bear took to a pool in Germany as much of Europe sweltered Tuesday in a summer heat wave.

Authorities warned that temperatures could top 40 C (104 F) in some parts of the continent over the coming days, the effect of hot air moving northward from Africa.

The Red Cross federation urged people to check on vulnerable friends, relatives and neighbors, citing the spike in heat-related deaths seen in Western Europe during a previous heat wave in 2003.

“The coming days will be challenging for a lot of people, but especially older people, young children, and people with underlying illnesses or limited mobility,” said Dr. Davron Mukhamadiev, the federation’s regional health coordinator for Europe.

“Our message this week is simple: look after yourself, your family and your neighbors,” he said. “A phone call or a knock on the door could save a life.”

Authorities in Switzerland raised the heat warning to the second-highest level for areas along the southern and northern borders with Italy and Germany, warning people to avoid strenuous activity and stay hydrated.

Germany’s meteorological agency DWD said it’s possible the current June record of 38.5 C (101.3 F) could be topped on Wednesday. Helicopters were deployed to battle wildfires in the country’s eastern state of Brandenburg, where forests have seen little rain lately.

Polar bear Nanook jumped into a pool at the zoo in Gelsenkirchen in western Germany.

“The best way to do this is with water,” he said. “Here they get water buckets but also hoses with holes in them so the water sprays like a garden hose. And they’re loving it.”