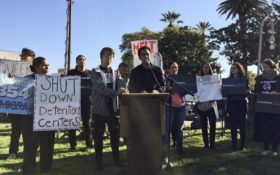 In a dramatic one-two punch, leaders in California’s Orange County voted Tuesday to condemn the state’s sanctuary law that limits police cooperation with federal immigration authorities and to join a Trump administration lawsuit that seeks to overturn it.

The all-Republican Board of Supervisors in the county that is home to 3.2 million people and many immigrants approved the measures by unanimous votes. One of the five supervisors was absent.

The meeting produced a raucous debate between those who say the moves uphold the rule of law and draw a line on illegal immigration and others who said it was racist and more about politics than public safety.

Supervisor Michelle Steel, an immigrant from South Korea, told the crowd that fixing the country’s immigration system will take time. “Along the way, law enforcement should absolutely cooperate fully within the constraints of federal law,” she said.

The votes were the most dramatic development in a growing counter-movement in more conservative-leaning areas of the state against the sanctuary law, which the Democrat-controlled Legislature approved last year as the Trump administration called for more stringent immigration enforcement and a wall on the entirety of the U.S.-Mexico border.

The U.S. Justice Department headed by Attorney General Jeff Sessions sued California earlier this month over three pro-immigrant state laws, including the one that bars local law enforcement officials in many cases from turning over prisoners to immigration authorities.

The lawsuit has highlighted longstanding divisions over immigration in California. For years, some local governments have sought to help federal immigration agents pick up prisoners from their jails to prevent them from being released back into their communities, while others have tried to keep their distance to encourage immigrant residents to trust police enough to come forward to report crimes.

In Orange County, the small city of Los Alamitos recently approved an ordinance to exempt itself from the state’s sanctuary law while leaders in the county seat of Santa Ana — a self-declared immigrant sanctuary — will consider filing an amicus brief to support California in federal court.

Legal experts and immigrant advocates have said cities can’t simply opt out of state law as Los Alamitos has proposed doing, and will face lawsuits if they try.

Orange County, which is home to Disneyland and wealthy beach communities where many people vacation, has long been known as a GOP stronghold, but Democrats have gained significant ground in recent years. Hillary Clinton won more votes than Trump in the county in the 2016 election.

The county also is becoming more diverse. Thirty percent of its residents are immigrants, mostly from Latin America and Asia, according to the U.S. Census Bureau. And three of the five supervisors are Asian-American.

Immigrant advocates rallied outside Tuesday’s meeting, some holding signs with slogans such as “Melt ICE,” a reference to Immigration and Customs Enforcement that enforces immigration laws. They felt the vote was a step back for a county that had been changing.

“History tells us that we will win. So I will be able to look in my children’s and grandchildren’s eyes and tell them I was on the right side of history,” Bethany Anderson of Fullerton told supervisors. “Will you be able to do that?”

But others welcomed the county’s decision to file a motion to intervene as a plaintiff in the lawsuit, and railed about the need to stop illegal immigration. About a dozen people wearing American flags and holding signs reading “Support Our Constitution” cheered when supervisors voted to condemn the state’s law.

“We cannot have all the states with different immigration laws. It just doesn’t make sense,” Doris Matyasovich told the board. “Our constitutional republic depends on following the rule of law.”

Sameer Ahmed, a staff attorney at the American Civil Liberties Union of Southern California, said some cities appear to be discussing largely political resolutions, not local laws. But the idea that an area as large as Orange County would take such a stand worries immigrant advocates, he said.

The county also moved this week to improve communication with federal immigration agents by publishing the release dates of inmates online. The sheriff’s department used to screen inmates in the county’s jails to help Immigration and Customs Enforcement agents identify those subject to deportation but had to stop when the state law passed.

Immigration and Customs Enforcement Deputy Director Tom Homan welcomed the move and said the agency continues to seek to cooperate with local law enforcement who want to assist.