Oprah wades into middle of election drama - The Horn News 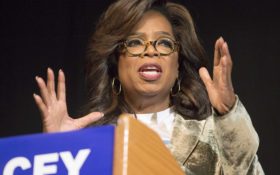 In a rousing speech in the Republican-leaning suburbs of Atlanta, Oprah Winfrey urged voters on Thursday to make history by backing Democratic gubernatorial candidate Stacey Abrams in next week’s election.

Winfrey called Abrams a “changemaker” who represents the values of all Georgians.

“I am here today because Stacey Abrams cares about the things that matter,” she said to a mostly female audience north of downtown Atlanta.

“Stacey Abrams is being bankrolled by Hollywood liberals,” Pence said.

Pence drew boos from the crowd when he mentioned that “Oprah is in town” and noted that actor Will Ferrell was recently in Georgia for Democrats.

“I’d like to remind Stacey and Oprah and Will Ferrell, I’m kind of a big deal, too,” Pence said, adding “a message for all Stacey Abrams’ liberal Hollywood friends: This ain’t Hollywood. This is Georgia.”

The competing scenes — from the candidates, to the audiences, to the headliner guests — underscore the choice Georgia voters face Tuesday in one of the nation’s premier midterm matchups. After Thursday’s dueling outsiders, former President Barack Obama will follow on Friday for Abrams. President Donald Trump will appear with Kemp on Sunday and previewed his argument on Thursday.

“I’ve always liked Oprah,” he told reporters at the White House. “Oprah’s good, but the woman that she’s supporting is not qualified to be the governor of Georgia by any stretch of the imagination.” Trump did not detail why he found Abrams unqualified.

Abrams, a Yale-educated lawyer who served a decade in the Georgia Legislature, would be the first black female governor in American history. She’s sought the post as an unapologetic liberal trying to draw new voters to the polls and prove that Georgia’s growth and diversity make it a legitimate two-party battleground.

She touts her experience working with Republicans as a state legislative leader, but she doesn’t back down on her promises to expand Medicaid insurance, prioritize public education and push for tighter gun restrictions.

Kemp is a staunch conservative who has embraced Trump and the administration’s hard-line on immigration. He wields guns in his ads and lambastes Abrams as a tool of “socialists” and “billionaires” who “want to turn Georgia into California.”

Both candidates have taken to describing the race as a battle for “the soul of our state.”

For her part, Winfrey sought to cut through the party-line framing.

The entertainment icon, who rarely makes political endorsements, drew cheers when she said she’s a registered independent who was not in Georgia at anyone’s request.

“I paid to come here myself, and I approved this message,” Winfrey said, explaining that she tracked down Abrams’ cellphone number and called her to say she wanted to offer assistance in the final days of the campaign.

She added a note to the throng of media gathered for the event, urging against any reboot of recent speculation that she might run for president in 2020.

“I’m not here because I’m making some grandstand for myself. I don’t want to run. I’m not testing the waters,” she said.

Touting the Democratic nominee’s pitch for Medicaid expansion, “common-sense gun control,” environmental regulations and “keeping families together, Winfrey said Abrams offers “the values that matter to Georgians all over this state.”

“Democracy is not just about our individual rights and concerns and our individual protections,” Winfrey said, “but rather it lives and thrives in making sure that everybody is lifted by the community.”

Winfrey did not mention Pence or the frequent GOP broadsides about “Hollywood” outsiders. But after her speech, in a sit-down interview with Abrams — reminiscent of the 25-year television run of her daytime television show — she noted they were “just two women from Mississippi,” where Abrams spent most of her childhood before moving to Georgia.

As a black woman, Winfrey noted her kinship to two groups historically denied ballot access in the United States. She recalled generations of black Americans who faced “lynching … oppression … suppression,” and declared that “their blood has seeped into my DNA” and forced her to the polls.

Then she encouraged women of all races — “sisters … not just ‘sistahs,’” she joked — to remember that they would have been “just a piece of property” with no ballot barely a century ago.

The pitches from Pence and Winfrey clearly fit Abrams’ and Kemp’s respective strategies.

Kemp is trying to extend the Republican domination in Georgia, which hasn’t elected a Democrat as governor since 1998. He’s banking on running up wide margins outside metro Atlanta and holding most of the GOP votes closer to the city. Goosing a GOP base that holds Trump and Pence in high regard is key to the approach.

Abrams is looking to maximize turnout among nonwhites, liberal urban whites and just enough whites everywhere else, including a smattering of moderates and suburban Republicans who are disenchanted with Trump — a considerable overlap with the fan base that propelled Winfrey to her billionaire icon status.