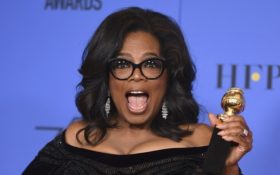 Jeanine Cummins’ “American Dirt,” one of the year’s most anticipated and debated novels, is Oprah Winfrey’s new pick for her book club.

“American Dirt,” published Tuesday, tells of a bookstore owner in Acapulco, Mexico, who loses much of her family to a murderous drug cartel and flees north on a terrifying journey with her 8-year-old son. The novel was acquired by Flatiron Books in 2018 in a reported seven-figure deal and has been talked about in the publishing world ever since. It has appeared on numerous lists of books to look for in 2020, has reached the top 20 on Amazon.com ahead of its release, and has been praised by everyone from John Grisham and Stephen King to Erika Sanchez and Sandra Cisneros.

Winfrey, interviewed Friday by telephone, told The Associated Press that one blurb that stood out was novelist Don Winslow’s comparing “American Dirt” to John Steinbeck’s “The Grapes of Wrath.”

“And I remember thinking, ‘Yeah right, you better know what you’re talking about because I have a first edition of ‘Grapes of Wrath,’ and it sits on a pedestal in my living room,‘” Winfrey said. “Now I wouldn’t say this is ‘Grapes of Wrath,’ but I would say that … I have been a news reporter, watched the news, seen the stories every day, seen the children at the border and my heart is wrenched by that. And nothing has done more (than ‘American Dirt’) to make me feel the pain and desperation of what it means to be on the run. It’s changed the way I see the whole issue and I was already empathetic.”

Cummins, who also spoke recently to the AP, says she first thought of the book in 2013 and was inspired for various reasons. Her husband emigrated from Ireland and she remembered the many years it took for him to get his green card, and the anxiety, before they married, that he might be deported. She also was moved by what she considered the media’s sensationalized coverage of immigration, and, more indirectly, by her lasting grief over a 1991 tragedy when two of her cousins were raped and forced off a bridge, falling to their deaths.

“So many of the stories center on violent men and macho violent stories about people who commit atrocities,” she said. “My hope was to reframe the narrative and show it from the point of view of the people on the flip side of violence.”

Cummins, who has ancestors from Ireland and Puerto Rico, said she spent extensive time in Mexico and met with many people on both sides of the border. Her novel has raised questions, however, over whether she, a non-Mexican and non-migrant, was suited for the narrative. Cummins herself has expressed doubts, writing in the book’s afterword: “I wished someone slightly browner than me would write it.” She then added that perhaps she could serve as a bridge. “I thought, ‘If you’re the person who has the capacity to be a bridge, why not be a bridge?’” Cummins wrote.

Cisneros has called “American Dirt” the “international story of our times,” but some other writers of Mexican heritage have criticized it. Myriam Gurba, whose work has been praised in O: The Oprah Magazine among other publications, has written online that Cummins reinforces “overly-ripe Mexican stereotypes, among them the Latin lover, the suffering mother, and the stoic man child.” David Bowles, a writer and translator, called the book “smug saviorism.”

Over the past few days, The New York Times published contrasting reviews. Times critic Parul Sehgal labeled the novel’s characters “thin creations,” criticized the language as strained and even nonsensical, and concluded that the “book feels conspicuously like the work of an outsider.” Author Lauren Groff, reviewing the book for The New York Times Book Review, found herself completely immersed but wondering whether she should have accepted the assignment.

“I could never speak to the accuracy of the book’s representation of Mexican culture or the plights of migrants; I have never been Mexican or a migrant,” wrote Groff, who nonetheless “kept turning the pages.”

“‘American Dirt’ is written for people like me,” Groff wrote, “those native to the United States who are worried about what is happening at our southern border but who have never felt the migrants’ fear and desperation in their own bodies. This novel is aimed at people who have loved a child and who would fight with everything they have to see that child be allowed a good future.”

After her review ran, Groff tweeted: “I wrestled like a beast with this review, the morals of my taking it on, my complicity in the white gaze.” She called Sehgal’s take “better and smarter.”

As a turning point in deciding to write the book, Cummins, 45, cited a conversation with Norma Iglesias-Prieto, a professor of Chicano and Chicana studies at San Diego State University. According to Cummins, Iglesias-Prieto told her, “We need as many voices as we can get.” (Iglesias-Preto recently told The Los Angeles Times that “everyone has the right to write about a particular topic even if you are not part of this community.”)

Winfrey chose “American Dirt” last fall and, when asked (before the Times reviews ran) about the controversy, said she wasn’t aware of it. But she cited her own visceral response as a sign that Cummins had fulfilled a vital role for fiction.

“She humanized this issue,” said Winfrey, who hopes to interview Cummins somewhere along the U.S-Mexico border. The interview will air March 6 on Apple TV Plus.

Winfrey has been boosting sales for books, sometimes by hundreds of thousands of copies or more, since 1996. She has championed first-time authors such as Ayana Mathis, and has looked back to such classics as “Anna Karenina” and “A Tale of Two Cities.” Cummins’ novel, Winfrey’s third pick for the partnership with Apple she began last year, continues her recent pattern of choosing high-profile new releases, including Ta-Nehisi Coates’ “The Water Dancer” and Elizabeth Strout’s “Olive, Again.” Winfrey said she follows no pattern except that the books compel her to tell others about them.

“There is no strategy. There is no plan,” she says. “I am open to all books.”

Cummins is the author of three previous works: the novels “The Crooked Branch” and “The Outside Boy,” and the memoir “A Rip In Heaven,” about the assaults and deaths of her cousins. She is hoping to start soon on a new novel. Cummins says she hasn’t decided on a plot, but expects the setting will be tied to her background — Puerto Rico.