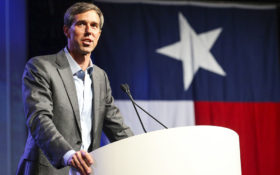 During this year’s Texas Senate race, some home-state Democrats grumbled that Beto O’Rourke wasn’t softening his liberal positions enough to finish a near-upset of Ted Cruz.

Now, as the outgoing congressman mulls a 2020 White House run, a small but vocal segment of activists is suggesting he’s not liberal enough, arguing he’s more about feel-good flash than commitment to values that will excite the party’s base.

O’Rourke has long rejected the “progressive” label but also bristles at being called a centrist. But he may not be able to steer clear of an ideological lane forever should he commit to entering the potentially packed Democratic presidential primary field.

At issue even as he’s still making up his mind are complaints from some liberals that O’Rourke racked up sizeable donations from oil industry executives while challenging Cruz, refrained from endorsing federally subsidized debt-free college proposals and shied away from the “Medicare-for-all” health care plan backed by Vermont Sen. Bernie Sanders, another possible early favorite in the 2020 race.

Dan Derozier, chairman of the Houston Democratic Socialists of America’s electoral committee, noted that O’Rourke’s big-tent political inclusion and optimism has drawn favorable comparisons to Barack Obama in 2008 but may not be practical for accomplishing sweeping liberal goals.

That’s a far cry from when O’Rourke got to Congress as an insurgent after toppling longtime Rep. Silvestre Reyes in the 2012 Democratic primary, despite the incumbent picking up an endorsement from Obama and campaigning with Bill Clinton.

O’Rourke joined the pro-business New Democrat Coalition, shunning the Congressional Progressive Caucus. He now says he’d instruct new lawmakers to forgo all such groups. Asked after a recent town hall in his hometown of El Paso if he was a “progressive,” O’Rourke answered simply, “I don’t know.”

Current criticisms from the left are ironic since Cruz often accused O’Rourke of “running like Bernie Sanders” and being backed by “the extreme left.”

Still, some believe those positions hurt O’Rourke’s crossover appeal with moderate Republicans, as did his support for an assault-weapons ban and relaxed federal immigration policies.

“I think Beto made some errors,” said Arthur Schechter, a top Democratic fundraiser in Houston. “Talking about impeachment really didn’t help his campaign in Texas.”

O’Rourke had been listed among candidates who signed a no fossil-fuel money pledge, promising to refuse donations worth more than $200 from oil-linked political action committees or oil company executives. According to the nonpartisan Center for Responsive Politics, O’Rourke received $420,000-plus from the oil and gas sector, the second most of any 2018 congressional candidate, behind only Cruz.

David Turnbull, a spokesman for Oil Change USA, which helped organize the pledge, said O’Rourke may have believed it only applied to donations from outside political groups linked to the oil industry and not also to executives in the field.

Though O’Rourke refused donations from all PACs, his name has since been removed from pledge-signers, and Turnbull said his group would still like to see the Texan return those donations.

“It’s great that he has signed up to not take PAC money,” Turnbull said. “But we are focused on extending that pledge further.”

An O’Rourke spokesman declined to comment. But his aides privately scoffed at running a campaign that tried to attract broad, bipartisan support in oil-rich Texas without taking donations from executives tied to the industry. They also noted that criticism from the left only intensified after O’Rourke began to be mentioned as a 2020 challenger to more established candidates like Sanders.

Ed Espinoza, executive director of Progress Texas, said in a presidential field as crowded as 2020 should be for Democrats, intraparty sniping is to be expected, but “I think that Beto really transcended a lot of progressive, moderate, conservative divisions by expressing his values, by being authentic.”

“The big thing that Beto has been very good at is expressing his values,” said Espinoza, whose Austin-based nonprofit says it “promotes progressive ideas.”

Even some would-be 2020 rivals may agree. Oregon Sen. Jeff Merkley, a liberal darling who is himself mulling a presidential run, traveled with O’Rourke last weekend to Tornillo, a desert tent city outside El Paso where 2,700 immigrant teens are being held as they seek U.S. asylum.

Merkley declined to comment on O’Rourke’s liberal credentials but said he was “really thankful that he was out there fighting for the kids this weekend in partnership.”

“I’m very impressed by his articulate presentation of many issues,” Merkley added, “including the fight to treat children with decency and respect when they’re coming here as refugees.”