OnlyFans model arrested in Hawaii for murder - The Horn News 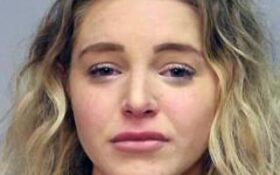 Law enforcement in Hawaii on Wednesday arrested social media model Courtney Clenney on a charge of second-degree murder with a deadly weapon.

Before the arrest, Clenney had achieved notoriety for modeling on OnlyFans, a platform often used to sell nude photos to subscribers.

Clenney, under the name Courtney Tailor, has also remained active on Instagram, a platform known for its stricter moderation of nudity.

Hawaii County police said in a statement they assisted the U.S. Marshals Service as they arrested the 26-year-old in Laupahoehoe, which is on the Big Island. Officers used an arrest warrant issued by Miami-Dade County, Florida.

She’s being held at the East Hawaii Detention Center while she waits for her initial court appearance in Hilo District Court on Thursday, police said.

The police statement gave no details about the accusations against her, but the Miami Herald reported that Clenney is accused of fatally stabbing her boyfriend, Christian Toby Obumseli, in April.

Her Miami defense lawyer, Frank Prieto, told the Miami Herald that she was in Hawaii while in rehabilitation for substance abuse and post-traumatic stress disorder.

“I’m completely shocked, especially since we were cooperating with the investigation and offered to voluntarily surrender her if she were charged,” Prieto said. “We look forward to clearing her name in court.”

In an unusual move, the defense lawyer continued speaking to the press. Usually, the police and prosecution speak about the case, but the defense advises its team to remain quiet. After all, the prosecution is filing the suit, and so prosecutors are usually one step ahead of the defense in shaping the media narrative.

Not this time! Prieto gave an interview with CBS Miami, and he used the platform to describe the killing as self-defense.

“This was not a crime. Courtney is innocent, she acted in self-defense and there should be no files charged in this case,” the defense attorney said. “We’re confident when the state attorney takes their final review along with the City of Miami police department, they’ll find that there’s no case here.”

Take a look at Prieto’s statement, obtained by CBS Miami —

We are completely shocked at Courtney’s arrest based upon the clear evidence of self-defense in this matter. Obumseli attacked her and choked her that evening; Courtney had no choice but to meet force with force. Further, we are disappointed that the State Attorney sought an arrest warrant in this matter; we have cooperated with the investigation from the beginning with both the State and the City of Miami Police Department. We have always offered to self-surrender if charges were filed in an effort to begin the legal process of clearing her of the charges.

Courtney was seeking treatment for her PTSD and related issues to this case and it is an absolute injustice to charge a victim of domestic violence and human trafficking with a crime; Courtney was clearly defending herself.  We will vigorously defend Courtney and clear her of this unfounded and baseless charge.

The victim’s family disputed the defense’s characterization of this incident as self-defense.

“We have no cause to believe that this was a case of self-defense. Toby was raised with a, by a very strong family with strong morals, strong values, he does not come from that,” Karen Egbuna, the victim’s cousin, told CBS Miami.

On Thursday, the police and the prosecution intend to present their side of the story.

Miami-Dade county prosecutor Katherine Fernandez Rundle announced a press conference scheduled for Thursday at 2:30 p.m. to announce the criminal charges being filed against Clenney, according to CBS Miami.

City Police Chief Manuel Morales and South Florida U.S. Marshal Gadyaces Serralta will speak at the press conference to detail the arrest, the prosecutor’s office said in a press release obtained by the Miami Herald.

The police may offer some gruesome details. In April, TMZ released a video of the initial arrest showing Clenney handcuffed and covered in blood.