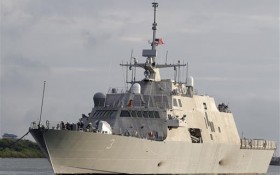 Hundreds of military officials – including some of the highest-ranking brass in the Navy – are accused of helping a shadowy Asian merchant fleece Uncle Sam for tens of millions of dollars… and you probably haven’t heard a peep about it.

It’s called the “Fat Leonard” scandal, and the investigation into bribes and corruption one of the biggest in U.S. military history. The Navy has investigated 440 people, including 60 admirals, for possibly taking bribes in exchange for phony government contracts and sweetheart deals.

That means the Navy suspects that up to one-third of all its admirals were on-the-take from a foreign agent.

“Fat Leonard” is Leonard Glenn Francis – a 6’3”, 360-pound Malaysian businessman who makes his money servicing naval vessels in the Pacific.

He bribed the Navy’s elite with the finer things in life that only a crooked businessman could provide: Money, the finest liquor, luxurious trips for their families.

Even tickets to see a Lady Gaga concert or the Broadway version of “The Lion King.”

They’d even reroute ships in the Seventh Fleet away from their original destinations to ports run by GDMA.

It was a mystery why Leonard kept getting lucrative government contracts when his company provided such shoddy service.

Investigators say Leonard covered all his bases. He also bribed people inside the Navy’s investigative unit. They’d run interference for him and let him know when honest inspectors were closing in.

Leonard was so well dug-in that he continued to get huge “no-bid” contracts – even while he was under investigation!

Under former President Barack Obama, Leonard’s ripped off U.S. taxpayers for more than $200 million in Defense contracts since 2009. He admitted at least $35 million of that was total fraud paid for services he never even provided.

The problem goes a lot deeper than money. The lives of 40,000 enlisted men – and the safety of the entire free world – depend on military commanders having honesty, integrity, and putting country first.

Imagine if war had broken out with North Korea or China, and our ships were in the wrong port because a Malaysian multimillionaire bribed the right commander with champagne and hookers?

Naval officers say Leonard’s theft and bribery operation was one of the most deep, vast, and penetrating they’ve seen since the days of Communist espionage.

Even a three-star admiral was taking pay-offs, they say.

Leonard and 17 others have already plead guilty – and under President Donald Trump, the investigation is only beginning.

— Frank Holmes is a reporter for The Horn News. He is a veteran journalist and an outspoken conservative. He also talks about the news that was in his weekly article, “On The Holmes Front,” every Saturday.