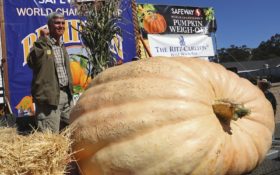 “One special seed” and months of care by an Oregon commercial pilot produced a massive pumpkin that tipped the scales at a global weigh-in Monday in Northern California, the fourth time his gargantuan plants were awarded top honors.

Steve Daletas of Pleasant Hill, Oregon, also credited lots of sunny days since he planted eight seeds on April 15 hoping to win the 45th World Championship Pumpkin Weigh-Off in Half Moon Bay, south of San Francisco. His winner came in at 2,170 pounds (984 kilograms).

“This all started with one special seed and a whole lot of work,” said Daletas, who raises giant pumpkins as a hobby. “We were really blessed it was sunny almost every day.”

It was the second-heaviest pumpkin ever weighed at the 40-year-old California event, but it was still far from a U.S. record. That was set just last month when a grower in New Hampshire produced a pumpkin weighing more than 2,500 pounds (1,134 kilograms).

The record for heaviest pumpkin in the world was set last year at a competition in Europe. A Belgium grower’s winning whopper came in at just over 2,600 pounds (1,179 kilograms).

Daletas, 58, needed a backhoe to place his massive pumpkin on a pickup truck for the drive to California. He said he strapped it down and drove “below the speed limit” for 12 hours to get to the contest.

A crowd, including dogs and babies in pumpkin costumes, watched massive pumpkins getting weighed on a warm, sunny day as a marching band played Halloween music.

The fourth-time pumpkin champ won $15,190, or $7 per pound, for the lumpy, orange pumpkin that will be showcased this weekend at Half Moon Bay Art & Pumpkin Festival.

“Thousands of people will get pictures with it, which is really why we do this in the first place, to put smiles on people’s faces,” Daletas said. “When the festival’s over, we’ll probably take it home and put it in front of our house.”