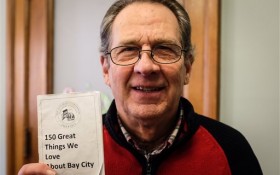 A man has won prizes worth nearly $2,000 after being the only person to enter a contest to celebrate a Michigan city’s 150th anniversary.

Taylor Langstaff had to do 25 activities in the Bay City area and stamp them off on a “passport” to win the prizes, MLive.com reported (http://bit.ly/1mEuS99 ). He was the only person to submit a fully-stamped passport.

The activities included seeing a show at The State Theatre, enjoying a beer at Tri-City Brewing Co. and going on a holiday tour of homes in Bay City’s Historic District.

Because Langstaff was the only entrant, he also received second through 10th place winner prizes. He’s a native of the city and volunteers at the Bay County Historical Museum.

“I love Bay City so much that this was pretty easy,” Langstaff said.

The passport and contest guidelines were sent to residents in utility bills beginning in late May. Deputy City Manager Dana Muscott said this was to give residents time to complete activities in the summer, but said the long waiting period may have caused some people to forget to enter.

“If anything, people still got a great book showcasing everything you can do in Bay City,” Muscott said.