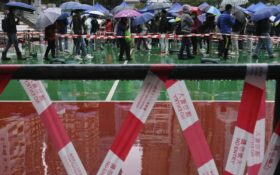 For two years, Hong Kong successfully insulated most of its residents from COVID-19 and often went months without a single locally spread case. Then the omicron variant showed up.

The fast-spreading mutation breached Hong Kong’s defenses and has been spreading rapidly through one of the world’s most densely populated places, overflowing hospitals and isolation wards and prompting measures to test the entire 7.4 million population and hastily build six isolation and treatment centers.

The surge shows what happens when COVID-19 strikes a population unprotected by immunity from previous infections, and has exposed a low vaccination rate among elderly citizens who are bearing the brunt of the crisis.

Only about 30% of Hong Kong residents over the age of 80 and around 58% of those in their 70s are fully vaccinated, lagging younger populations by a large margin. This is despite the fact that vaccines have been widely available in Hong Kong since early 2021.

The city has reported about 150 deaths in the past three days, many among the unvaccinated elderly.

Health authorities said that the vaccine reluctance among the elderly is an unfortunate side-effect of Hong Kong’s success in warding off the virus for months.

Many people thought that the risk of getting COVID-19 was virtually nil since there were no cases, and senior citizens were led to believe that the risk of vaccination was greater than not getting vaccinated, said Karen Grépin, a public health expert at the University of Hong Kong.

Hundreds of millions of jabs have been given to people around the world and few serious risks have been identified after intense safety monitoring. But early reports of a few adverse reactions to the vaccine in Hong Kong created a false perception that people needed to be perfectly healthy to get vaccinated.

“Hong Kong is the world’s guinea pig, when it comes to omicron,” said Grépin.

The Hong Kong experience may also hold lessons for mainland China and its decision on when to re-open its borders and eliminate a two- to three-week quarantine requirement for anybody entering the country. Only a small proportion of the population has been infected, thanks to the Communist Party’s strict zero-COVID approach of mass testing and lockdowns.

The Hong Kong government’s response has been to ramp up a zero-COVID approach similar to the mainland. Chinese officials have urged Hong Kong to stick to the approach, despite grumbling from residents, with even leader Xi Jinping weighing in to make sure the message got through.

Under the zero COVID-19 policy, everyone who tests positive in Hong Kong needs to be isolated. While this worked in the past, Hong Kong, unlike the mainland, does not have the beds to isolate so many people in a large outbreak.

Construction teams from the mainland are rushing to build two permanent and four temporary isolation and treatment centers to handle more than 20,000 patients in an effort reminiscent of the early days of the virus when China threw up two temporary hospitals in the city of Wuhan in a matter of days.

Authorities also launched a vaccine pass on Thursday, requiring vaccination to enter shopping malls and other premises, and it is driving some to get the shot.

“If I don’t get vaccinated, I can’t even go to restaurants,” said 73-year-old Yu Mui as she lined up for her first dose Friday. “So I have to come here today even though I am worried about the side effects.”

Scientists believe that the omicron variant is milder than the delta version of the virus. But Hong Kong’s situation is nearly unique. In other nations where the omicron variant spread, people had immunity from vaccines or previous infections, and this blunted the severity of the disease.

With many people unvaccinated and vulnerable, Michal Head, a global health expert at University of Southampton, fears that it may have a “worryingly high burden of severe COVID-19 in coming weeks”.

“Omicron has been described by some as ‘mild’. But it’s certainly still severe enough to have a high mortality rate, far higher than flu or other similar respiratory infections,” he warned.

Irene Leung, who is 70, said she didn’t feel the need to be vaccinated earlier because the pandemic was under control in Hong Kong. On Friday, she lined up for her first dose.

“But now it gets worse and so I decided to come and get vaccinated,” she said. “It protects not only myself but also my family members.”

And Hong Kong has announced it will test everyone in the city next month, taking another page from the mainland playbook. China has sent in experts and others to put up temporary labs to handle the volume of tests.

But Benjamin Cowling, who studies epidemics at Hong Kong University, advised against mass testing in March since it would be hard to deal with the sheer number of confirmed cases that the approach would throw up. Instead, he suggested using the nimbler, rapid tests to alert people to isolate at home if they were infected and had mild symptoms.

The ultra-contagious nature of the omicron variant means that unless you have incredibly stringent lockdown measures, mask-wearing and social distancing norms, you’re not going to stem the spread, said Dr. Jimmy Whitworth, an infectious diseases expert at the London School of Hygiene and Tropical Medicine.

Even China is battling multiple outbreaks, though they are much smaller than Hong Kong’s. China on Sunday reported 239 new cases in the mainland, of which 127 were among people who had arrived from overseas.

Hong Kong, by comparison, on Saturday reported more than 17,000 new cases in the latest 24-hour period and 66 deaths.

Whitworth said that Hong Kong’s priority right now should be to encourage vaccination. “That is by far and away, the most important message. And particularly targeting the elderly,”