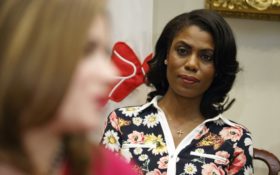 Former presidential adviser Omarosa Manigault Newman drew fire from President Donald Trump’s allies and national security experts for secret recordings she made at the White House, including her firing by chief of staff John Kelly in the high-security Situation Room.

Manigault Newman said Sunday on NBC’s “Meet the Press” that she surreptitiously recorded a number of conversations in the White House for her own protection, and on Monday she released another audio recording on NBC’s “Today” show that featured President Donald Trump.

Parts of her conversations with Kelly and Trump were played on the air, and critics denounced the recordings as a serious breach of ethics and security.

“Who in their right mind thinks it’s appropriate to secretly record the White House chief of staff in the Situation Room?” tweeted Ronna McDaniel, chairwoman of the Republican National Committee.

“It’s come to my attention over the last few months that there’s been some pretty, in my opinion, significant integrity issues related to you,” Kelly is heard saying, citing her use of government vehicles and “money issues and other things” that he compares to offenses that could lead to a court martial in the military.

“If we make this a friendly departure … you can look at your time here in the White House as a year of service to the nation and then you can go on without any type of difficulty in the future relative to your reputation,” he tells Manigault Newman, adding: “There are some serious legal issues that have been violated and you’re open to some legal action that we hope, we think, we can control.”

Manigault Newman said she viewed the conversation as a “threat” and defended her decision to covertly record it and other White House conversations.

The response from the White House was stinging. “The very idea a staff member would sneak a recording device into the White House Situation Room, shows a blatant disregard for our national security – and then to brag about it on national television further proves the lack of character and integrity of this disgruntled former White House employee,” press secretary Sarah Huckabee Sanders said in a statement.

On Monday, the former presidential adviser released another recording while appearing on the “Today” show, and she says it features Trump. The recording, is purportedly a phone conversation between Trump and Manigault Newman after she was fired from the White House. It appears to show Trump expressing surprise, saying “nobody even told me about it.”

Manigault Newman expressed that “If I didn’t have these recordings, no one in America would believe me.”

The Situation Room is a Sensitive Compartmented Information Facility, or SCIF, where the nation’s most consequential foreign policy decisions are made, and staff are not permitted to bring in cellphones or other recording devices.

“I’ve never heard of a more serious breach of protocol,” said Ned Price, who served as spokesman of the National Security Council in the Obama administration. “Not only is it not typical, something like this is unprecedented.”

Price said there is no one checking staffers for devices at the door, but there is a sign outside the room making clear that electronic devices are prohibited.

“The Situation Room is the inner-most sanctum of a secure campus,” he said, describing the breach as part of a culture of disregarding security protocols in the Trump White House.

Manigault Newman’s new book will be released on Tuesday, and she threatens that it will “blow the whistle” on White House corruption.