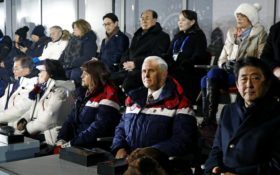 In an extraordinary show of unexpected unity, North and South Korea sat side by side Friday night under exploding fireworks that represented peace, not destruction, as the 2018 Winter Olympics opened on a Korean Peninsula riven by generations of anger and suspicion.

The sister of North Korea’s leader, Kim Jong Un, shook hands with South Korean President Moon Jae-in — and appeared genuinely pleased — while they watched an elaborate show of light, sound and human performance. Minutes later came a moment stunning in its optics and its implications: the United States, represented by Vice President Mike Pence, sitting a row ahead of Kim’s sister and the North’s nominal head of state, all watching the games begin — officials from two nations that many worry are on the brink of nuclear conflict.

After years of frustration, billions of dollars and a nagging national debate about their worth, the opening ceremonies took place before a world watching the moment not only for its athletic significance and global spectacle, but for clues about what the political future of the peninsula could hold. A delegation from North Korea, dressed in identical garb and cheering in careful coordination, watched from an upper deck of the stadium.

Sponsored: The #1 snack that shut down Alzheimer’s research

Then began the Olympic tradition that takes place at every games — the march of athletes from the world’s many nations, girded against a frigid Korean night and temperatures that dipped below freezing with biting winds.

“Athletes from the two Koreas will work together for victory, and that will resonate with and be remembered in the hearts of people around the world as a sign of peace,” Moon said in a reception ahead of the ceremony, according to his office.

A huge crowd gathered in the freezing Olympics Stadium in this isolated, mountainous corner of South Korea, as performances displayed the sweep of Korean history and culture. Members of a delegation from North Korea, part of an extraordinary Olympics partnership between the two Korean rivals, watched from high in the stadium a performance called “The Land of Peace” and as past South Korean athletes paraded a large southern flag.

After a chaotic year of nuclear war threats and nuclear and missile tests from the North, it was a striking visual moment.

There was a palpable excitement in this isolated, rugged mountain town, as one of the poorest, coldest and most disgruntled parts of an otherwise prosperous South Korea kicked off two weeks of winter sports, Olympic spectacle and, just maybe, a bit of inter-Korean reconciliation.

There will be plenty of sporting drama for both die-hard snow and ice junkies and the once-every-four-years enthusiast.

Will the Russians who aren’t Russians — the 168 who have been invited as “Olympic Athletes from Russia,” competing in neutral uniforms under the Olympic flag — bring home gold? Will Patrick Chan of Canada hit his quad jumps and claim figure skating glory?

Can reigning men’s gold medalist Yuzuru Hanyu of Japan overcome injury and defend his title against Chan? Will the past and present star of American skiing, Lindsey Vonn, be surpassed by the likely future of the sport, Mikaela Shiffrin?

But the athletic aspect of these games has been overshadowed in the buildup to the opening ceremony by a frenzied, increasingly momentous fire-hose spray of political developments. The rival Koreas, flirting with war just weeks ago, are suddenly making overtures toward the no-longer-quite-so-absurd notion of cooperation.

The North has sent nearly 500 people to the Pyeongchang Games including officials, athletes, artists and cheerleaders after the Koreas agreed to a series of conciliatory gestures to mark the games. More than 2,900 athletes from 92 countries will compete here, making it the biggest Winter Olympics to date.

“Everybody make some noise!” two pre-ceremony emcees shouted in English and Korean as spectators streamed into the Olympic Stadium before the ceremony.

After two failed Olympic bids that emphasized the high-sounding notion that the games could help make peace with North Korea, Pyeongchang finally sold its successful try in 2011 on the decidedly capitalistic goal of boosting winter sports tourism in Asia.

But North Korea has a habit of not letting itself be ignored when it comes to its southern rival.

Its agents blew up a South Korean airliner ahead of the 1988 Seoul Olympics in an attempt to dissuade visitors; then it boycotted its rival’s Olympic debut on the world stage. A few years later, the discovery of the huge progress Pyongyang had been surreptitiously making on its nuclear programs plunged the Korean Peninsula into crisis. It has only deepened over the years as the North closes in on the ability to field an arsenal of nukes that can hit U.S. cities.

And so, with a little help from a liberal South Korean president eager to engage Pyongyang, the 2018 Pyeongchang Games open.

They do so with as much focus on the North, which has zero real medal contenders, as the South, which in the three decades since its last Olympics has built a solid winter program as it went from economic backwater and military dictatorship to Asia’s fourth-biggest economy and a bulwark of liberal democracy.

Could Pyeongchang’s initial pitch — that it could contribute to peace on the Korean Peninsula — actually become reality? The opening ceremony will offer at least some hints about that, and maybe more. What’s certain is that these Games, more so than any in recent memory, are about far more than sports.