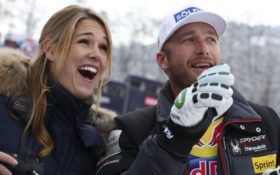 Olympic skier Bode Miller and his wife, Morgan, hope that by talking about their 19-month daughter’s drowning death, they can prevent other parents from experiencing such heartbreak.

The couple appeared in their first public interview Monday on NBC’s “Today” show.

Morgan described visiting her neighbor’s home with their children in June when she realized that daughter Emmy was missing. She saw a sliver of light coming from the door leading to the backyard and said her “heart sank.” She opened the door and saw her child floating in the pool.

Their child died the next day at a hospital. Bode Miller said her brain went too long without oxygen.

Bode Miller said talking about her death helps them to heal and maybe helps prevent it from happening to other parents.