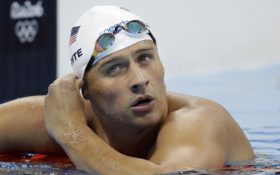 Ryan Lochte is undergoing counseling for alcohol use, but the 12-time Olympic medalist is not in a treatment facility and is training in his bid to make the 2020 Tokyo Games, the swimmer’s lawyer said Thursday.

The decision to pursue counseling has nothing to do with incidents in California and Florida last week, attorney Jeff Ostrow told The Associated Press. Asked if Lochte plans to give up alcohol, he said, “Ryan will make that decision.”

Ostrow said the 34-year-old swimmer wants his family and fans to be proud of him, and he doesn’t want to repeat the “poor decisions” that have plagued him in recent years.

“He is not in a treatment facility. He’s been evaluated by professionals who know the best about this and they have said this is not what he needs to do,” Ostrow said by phone from South Florida. “He’s following the protocols that have been recommended. He’s going to be great.”

A week ago, in Newport Beach, California, Lochte reportedly tried to kick down his hotel room door hours after attending an event for his swimsuit sponsor TYR. No police report was filed.

“Ryan didn’t do anything crazy while he was out there,” Ostrow said.

Later that same night, back in his home state of Florida, Lochte was cited for careless driving after rear-ending another car.

“He 100 percent was not drinking,” Ostrow said. “It was after a long day of flying back from west to east. If alcohol was involved, everyone would know it.”

“He’s not an alcoholic where he’s drinking every day and it’s impacting his ability to function as a father and athlete,” the attorney said. “But there was a pattern of poor decision-making at the same time there was alcohol. Ryan wanted to put an end to that.”

Lochte is currently serving a 14-month ban for receiving an intravenous injection in May. He posted a photo of himself receiving a vitamin injection on Instagram, triggering a U.S. Anti-Doping Agency investigation that found the swimmer didn’t take a banned substance. Intravenous injections, however, are allowed only if an athlete has been granted an exemption from USADA. Lochte did not have such an exemption.

“I should have known better,” Lochte said in a video interview from the TYR launch event last week. “I wasn’t taking anything illegal.”

Lochte’s reputation has taken other hits for issues out of the pool, notably in 2016 when he claimed he was robbed at gunpoint at a Rio de Janeiro gas station after celebrating the end of the Olympic swimming competition. Rio police said Lochte’s robbery story was false. Charges of “falsely communicating a crime to authorities” were eventually dropped by a Brazilian court.

Lochte was suspended 10 months as a result by USA Swimming and lost several sponsors.

“Everyone thinks I’m in a gutter, literally,” Lochte said with a laugh in the video.

His personal life seemed to rebound with the birth of son Caiden in June 2017. He and former Playboy model Kayla Rae Reid wed in a Florida courthouse in January and followed up with a lavish ceremony in Southern California last month.

“I’ve got knocked down so many times,” Lochte said in the video. “There’s only one way to go and that’s up from now on. I’m in a good place right now, my son is getting bigger, my family, they’re growing.”

Lochte’s former rival, Michael Phelps, struggled with alcohol issues in the past. The 23-time Olympic gold medalist was twice arrested for drunken driving. He checked into a rehab clinic after the second incident and said he had considered taking his own life.

“Ryan isn’t rock bottom,” Ostrow said. “He’s not in a bad place other than his public perception.”

Lochte’s current suspension kept him from competing at U.S. nationals in July, when swimmers qualified for the Pan Pacific championships in August and next year’s world championships.

The ban runs through July 2019, leaving him to race against training partners or in unsanctioned events as his only options for now. Still, he vows he will return to competition and be a threat to make a fifth Olympic team in 2020.

“When I do come back into the swimming, I’m going to turn some heads,” Lochte said in the video. “I’m not going to let this whole IV situation or the whole legal thing keep me down. I’m going to pull together and I’m going to rise above it.”