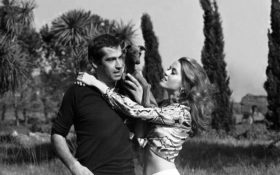 Hanoi Jane is back — and she’s gathering support for an underdog Democratic presidential candidate.

Jane Fonda is joining a group of Hollywood power players to host a fundraiser for presidential candidate Steve Bullock on Thursday, a show of support that could lend credibility among Democratic donors to the little-known Montana governor.

The liberal actress is among a handful of Hollywood bigshots, producers and lawyers hosting the event at the home of model and professional golfer Anna Chervin and her talent-agent husband, Ted, according to an invitation obtained by The Associated Press.

Bullock, a cowboy-boot-wearing executive from a rural state won by President Donald Trump, may seem like an unusual benefactor of campaign cash from members of the Hollywood elite often associated with far-left causes. But his success enacting some progressive priorities such as expanding Medicaid, combined with his distinction as the only White House contender to get reelected at the same time his state broke for Trump, has led some donors to take a closer look.

“A progressive governor from a Trump state has a great story to tell,” said Rose Kapolczynski, a veteran Democratic strategist in California. =

A Fonda representative did not immediately respond to a request for comment.

The fundraiser comes as Bullock is in a tiff with the Democratic National Committee, which established polling and fundraising benchmarks to qualify for next week’s debates in Miami that Bullock didn’t reach after getting a late start with his campaign.

Although Bullock’s campaign says he will qualify for the upcoming July debate in Detroit, subsequent ones will have an even higher requirement threshold, underscoring the necessity for Bullock to line up donor support.

Fonda is not the only top liberal celebrity or donor to show interest in Bullock.

Jeff Bridges, the Academy Award-winning actor known for his role as “The Dude” in the cult classic “The Big Lebowski,” has donated to his campaign. Country musicians Lyle Lovett and Robert Earl Keen helped with a fundraiser in the past. And DreamWorks founder Jeffrey Katzenberg, a massive player in the Hollywood money game, cut a check to Bullock’s political action committee for $5,000 last year, Federal Election Commission records show.

Bullock also had an event co-hosted for him last month by Democratic megadonor Steve Rattner, according to an event invitation obtained by the AP.