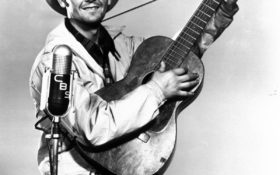 Woody Guthrie’s Oklahoma hometown has doubled in population as thousands gather for a music festival in honor of the “This Land Is Your Land” singer.

The Journal Record reports that the town of Okemah jumps from about 3,000 to 6,000 people during the annual Woody Guthrie Folk Festival.

Festival organizer Kay Thompson says it brings music fans from around the world to Okemah, about 70 miles east of Oklahoma City. Thompson says some come from as far away as Scotland and Australia.

Bob Dylan and Bruce Springsteen have cited Woody Guthrie as an influence.

This is the festival’s 21st year. It continues through Sunday.