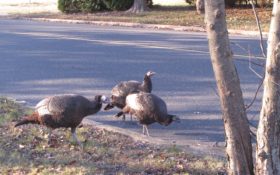 New Jersey has drumsticked up a plan to deal with flocks of wild turkeys that are ruffling some feathers in a Jersey Shore neighborhood.

And it doesn’t involve them winding up on dinner plates in two weeks.

The state Department of Environmental Protection will trap scores of turkeys that have descended on a retirement community in Toms River and relocate them.

The move comes as some residents say large flocks of turkeys have invaded the area, pecking at cars, and at some people who venture too close.

“I had a small blow-up pool in my backyard for my grandson; it lasted exactly one day,” said Cindy Lijoi. “They pecked holes in it. It’s been a nuisance and it really needs to be addressed. They peck at people’s cars; you can’t get out the door sometimes because they won’t move.”

Vinnie Caravello says he routinely sees groups of 20 to 30 birds strutting through the streets.

“They do cause damage,” he said. “If they see their reflection in the car, they’ll peck the car. And they take over the road.”

Others say they give the birds a wide berth and haven’t experienced any problems.

“They’re harmless,” said Deborah Richardson. “I talk to them. They know it’s me. I go ‘gobble, gobble.’”

Toms River residents who have run a-fowl of the birds include former New York Yankees and Mets baseball player Todd Frazier, whose SUV was covered by roosting turkeys recently. He posted a picture on Twitter, and said he was ready to talk turkey with New Jersey Gov. Phil Murphy, urging him to do something about the birds.

“They are a big problem here,” Frazier wrote. “Toms River and the Toms River wildlife say they can’t move them. That’s ridiculous. They have come close to harming my family and friends, ruined my cars, trashed my yard and much more.”

The DEP issued a statement late Wednesday saying it met with homeowner associations in the area and decided on a plan to trap and net some of the turkeys, which will then be relocated to an unspecified location. It said state crews have begun laying out trails of corn to establish a feeding routine for the birds before dropping nets on them, a process it said would take several weeks to succeed.

In the meantime, it urged people not to feed the birds. Some residents, while complaining about the birds’ numbers, have acknowledged leaving food out for them — in effect, pre-stuffing them.

There are between 20,000 to 23,000 wild turkeys in New Jersey, according to the state. That wasn’t always the case; the birds were not present in the state in the 1800s. But in the late 1970s the state began an effort to re-establish them, which has obviously succeeded.

The DEP also recommended people use air horns to scare them away, or wave brooms at them or spray them with water from a garden hose. It also said people may want to cover windows with cardboard so the birds won’t see their reflections and peck at them, thinking they are attacking another bird.

Toms River Administrator Don Guardian said some residents have voiced concern about being intimidated by the birds.

“They say they can’t even get to their mailboxes when there are 20 or 30 birds around it,” he said.

But Guardian also said even residents with complaints about the birds said they did not want them harmed.

“There was some concern that the birds might be euthanized, which no one wanted,” he said.

And Toms River officials said they were barred from getting involved with wildlife unless it was sick or injured. The township’s website includes a section of how to deal with wild turkeys that relies heavily on remembering one’s spot atop the food chain.

“It’s important that all members of your family (including children and the elderly) exhibit their dominance over your neighborhood turkeys through hazing in order to have the desired effect,” the post read. “Although wild turkeys may look large and intimidating, they are usually timid and scare easily.”