Officials save 800+ turtles in storm drain rescue - The Horn News 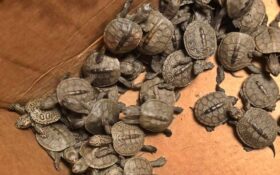 They’re lean, they’re mean and they’re green. Teenage Mutant Ninja Turtles? Not exactly, but hundreds of diamondback terrapin hatchlings have been rescued from subterranean storm drains along the Jersey Shore.

According to a Stockton University Facebook post, the turtles were hiding from the cold temperatures over the winter and surviving off yolk sacks in drains in Margate, Ventnor and Ocean City.

Volunteers who rescued 826 of the animals turned them over to Stockton University’s “Head Start” program, where staff will care for and rehabilitate the creatures for about a year before placing them back in the wild, NJ Advance Media reported.

There are 1,108 terrapins receiving care from the program, which has reached capacity.

If you find a hatchling, Stockton recommends placing the animal in room-temperature water up to the shell with a rock it can climb on. Healthy turtles can be released at dusk into a tidal creek or bay area.