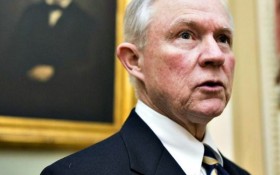 Authorities in the U.S. and Central America say they have indicted thousands of violent street gang members since March, including a powerful MS-13 leader who allegedly ordered bloodshed on the East Coast while imprisoned in El Salvador.

Law enforcement officials planned to announce the arrests Friday in Miami, where Justice Department officials are meeting with attorneys general from the so-called Northern Triangle countries of El Salvador, Guatemala and Honduras. The notoriously brutal street gang has roots in Central America and the U.S., and authorities are touting the indictments of 3,800 members in six months as a sign that bolstered cooperation among the countries is paying off.

MS-13 has become a prime target of the Trump administration, which discusses its violence in suburban, immigrant communities in an effort to build support for a broader crackdown on immigration. President Donald Trump directed federal law enforcement to focus resources on combating transnational gangs during his first weeks in office. And Attorney General Jeff Sessions flew to El Salvador in July, in part to learn more about how the gang’s activities there affect crime in the U.S.

Sessions’ aggressive work against MS-13 is one way he continues to carry out Trump’s agenda at the Justice Department, even as the president remains openly critical of his decision months ago to recuse himself from the investigation into Trump campaign ties to Russia. During a White House dinner with conservative leaders this week, Trump expressed “almost disdain” for Sessions when asked about a technical matter involving the Justice Department, according to a participant, who spoke on condition of anonymity to discuss the private meeting.

For federal prosecutors who have long worked to quash the gang, the new emphasis has been rewarding.

The arrests include more than 70 people in the U.S. during roundups in Los Angeles, Virginia, Maryland, Massachusetts, the Long Island suburbs of New York and Columbus, Ohio. Among those charged is Edwin Manica Flores, known as “Shugar,” who investigators say led the gang’s East Coast operation from prison in El Salvador, according to a racketeering indictment unsealed in Boston Thursday. It says he encouraged recruitment in the U.S. and taught his counterparts ways to evade law enforcement.

Law enforcement in the Northern Triangle arrested hundreds more, including members of the rival 18th Street gang, seizing guns and luxury cars and in some cases entire businesses, officials said.

U.S. cases are so often linked to those in Central America that investigators from all of the countries will use the Miami visit as a chance to swap intelligence and share strategies that can help build cases against gang members in the U.S., said Kenneth A. Blanco, acting head of the Justice Department’s criminal division.

“The fact that we are hitting them on both sides is really what’s important,” Blanco said.

MS-13 is believed by federal prosecutors to have more than 10,000 members in the U.S., a mix of immigrants from Central America and U.S.-born members. The gang originated in Los Angeles in the 1980s then entrenched itself in Central America when its leaders were deported.

MS-13 and rival groups in El Salvador, Guatemala and Honduras now control entire towns, rape girls and young women, kill competitors and massacre students, bus drivers and merchants who refuse to pay extortion. That violence has prompted a migration of people trying to escape, especially children, some of whom are then recruited into the gang once in the U.S.

Associates in the U.S. send money to gang leaders in El Salvador, who use it to buy weapons and cellphones. Gang leaders imprisoned there use the phones to instruct members in the U.S. to kill rivals and extort immigrants. Authorities say the indictment in Boston illustrate how the gang operates.

“The more work we do down there, the more it helps us up here,” said David Rybicki, a deputy assistant attorney general in the Criminal Division, who oversees the organized crime and gang unit. “We can’t effectively work on our cases here without information from El Salvador.”

The timing of the get-together is critical, as the indictments will change gang dynamics, said Zach Terwilliger, who prosecuted gangs in the Eastern District of Virginia before taking a position in the deputy attorney general’s office.

“The gang feels as though it’s under a microscope,” he said.

Dismantling gangs like MS-13 has always been a goal of federal prosecutors, but Sessions has made it a priority of his Justice Department, in comparison to his predecessors, who viewed other threats as more urgent, like homegrown extremism and cyberattacks from foreign criminals.