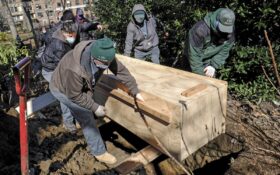 Human remains of early New Yorkers that were discovered during construction in and around Washington Square Park were reinterred inside the park on Tuesday, New York City officials announced.

The remains, uncovered during construction between 2008 and 2017, were reburied with assistance from the city Landmarks Preservation Commission and Brooklyn’s historic Green-Wood Cemetery, Parks Commissioner Mitchell Silver said.

“Today we honor these individuals and acknowledge Washington Square Park’s history as a final resting place for thousands of early New Yorkers,” Silver said. “We are so grateful to our colleagues at Green-Wood Cemetery and the Landmarks Preservation Commission for their expertise and guidance on this important project.”

Sarah Carroll, chair of the landmarks panel, thanked the Parks Department “for ensuring that archaeology was appropriately completed, and the human remains were respectfully treated throughout the process.”

Washington Square Park in Manhattan’s Greenwich Village neighborhood was constructed in the 1850s at the site of a former potter’s field. Thousands of people were buried there between 1797 and 1825, officials said.

The partial remains that were reinterred on Tuesday were placed in a wooden box and buried in a planting bed with an engraved paving stone marking the spot, Parks Department officials said.

Because the remains were fragmentary, forensic analysis did not yield details about the individuals, the officials said.