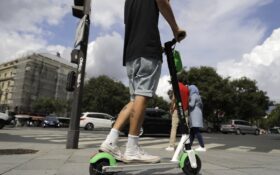 Police in Oslo have seized a tuned, privately-owned electric scooter with a top speed of 58 kilometers per hour (36 mph), which is nearly three times the speed limit for it.

The electric scooter was seized during a control program Monday in downtown Oslo in a joint operation with the Norwegian Public Roads Administration during which two electric scooters were stopped on suspicion of illegal speeding.

The owners face prosecution, police said, but didn’t say what kind of punishment they could face.

Electric scooters can have a maximum top speed of of 20 kilometers per hour (12.4 mph), Oslo police said.

Rental e-scooters are a common sight in European cities and are often strewn across sidewalks. Some people riding them have ended up in emergency rooms with serious injuries and there have been reports of fatal accidents.