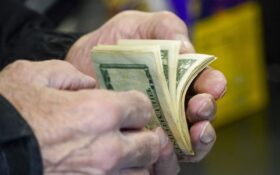 The village manager in a northern Michigan community has resigned after an investigation of $32,000 in mistaken payroll payments to public workers.

The error in Elk Rapids occurred in October 2021, but the public was in the dark for nearly a year until a resident began asking questions, the Traverse City Record-Eagle reported.

Nearly 40 people got extra pay because the village mistakenly debited bank accounts twice, according to an investigation.

The mistake was not immediately reported to the village council or the public and was not quickly fixed, according to attorney Scott Howard’s report.

Village Manager Bryan Gruesbeck’s resignation was accepted by the council Monday night. Another official was reprimanded and a third, Kerri Janisse, was suspended for two weeks without pay.

“The buck stops with the village manager,” Howard’s report stated.

Jim Janisse, who was village president, had pledged before the November election to repay any money that hadn’t been returned by village employees, the Record-Eagle reported.

He lost his reelection bid. Jim Janisse is married to Kerri Janisse, who was village treasurer when the error occurred. She’s now the zoning administrator.