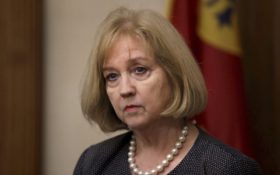 St. Louis has pulled several police officers off the streets while an internal investigation continues after they were accused of posting objectionable Facebook messages, Mayor Lyda Krewson said Friday.

The decision to place the officers on administrative duty follows publication of a database that appears to catalog thousands of bigoted or violent posts by active-duty and former officers in St. Louis and elsewhere. Police departments in at least five states are investigating.

Krewson, in an interview with the St. Louis Post-Dispatch , called the posts “inappropriate and disturbing.”

Some of the posts tout roughing up protesters or mock foreign accents. Others display the Confederate flag and question whether Black History Month is racist.

Krewson said the officers reassigned to inside work were tied to “the most egregious” of the posts.

“It’s a matter of not interacting with residents and businesses on the street,” she said.

In the wake of the Plain View Project report, St. Louis Public Safety Director Jimmie Edwards announced Tuesday that city police will undergo sensitivity training. Edwards said the training will start next week with the “first-line supervisors” — the 60 to 70 sergeants — and then gradually involve the rest of the department.

On Wednesday, city officials said all 7,200 of St. Louis’ civil service employees will get additional training on discrimination, harassment and social media rules.

Personnel Director Rick Frank said Wednesday that from now on, every city employee will be required to get training once a year that will incorporate social media issues.