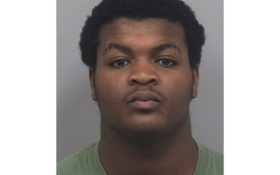 A police officer on Monday shot and killed an 18-year-old man accused of fatally shooting another officer near a school in the Atlanta area over the weekend, police said.

Tafahree Maynard was one of two men charged in the fatal shooting Saturday of Gwinnett County police Officer Antwan Toney. Police believe Maynard shot Toney, and had launched an area manhunt as he faced charges of aggravated assault and felony murder.

Police received credible information Sunday night that Maynard was still in the area and dozens of officers were mobilized to search for him, police said in an email Monday. They said a SWAT team was called to clear multiple locations because of the potential threat Maynard posed.

Two officers searching a shed behind a house that belonged to someone Maynard knew encountered Maynard about 11 a.m. Monday, police said. Maynard refused to surrender and failed to comply with verbal commands to show his hands, police said.

“I would like to say that the danger to the community is over,” Ayers said at a news conference, adding that police would continue to investigate any potential charges against people who may have provided assistance to Maynard “during his attempt to escape justice.”

A second suspect, 19-year-old Isaiah Pretlow, was charged with aggravated assault. According to police, Pretlow drove the suspicious vehicle away after the shooting, crashed a short distance away and fled along with other occupants. An officer searching the area later encountered Pretlow around 3 p.m. Pretlow pointed a gun at the officer, who fired shots, according to police. Pretlow was not hit and fled into some woods. He was subsequently taken into custody around 11:30 p.m. Saturday by U.S. Marshals.

No officers were injured in the encounter with Maynard. The Georgia Bureau of Investigation is investigating, which is standard procedure for shootings by police.

Toney was responding to a call around 2:30 p.m. Saturday about a suspicious vehicle near Shiloh Middle School in the Snellville area, about 25 miles (40 kilometers) northeast of Atlanta. When he and his partner approached, someone inside the vehicle fired from inside and Toney was hit, police said. The vehicle sped off.

Toney died at a hospital from his wounds, police said. The 30-year-old from Southern California had been with the Gwinnett County Police Department for nearly three years, serving in his first police job.

Services for him were announced Monday. The funeral is set for 11 a.m. Wednesday in Lawrenceville.