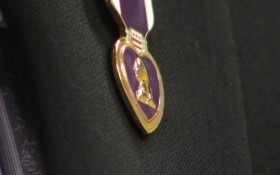 Shane Ladner was sentenced Tuesday as a first offender to 10 years’ probation. District Attorney Shannon Wallace told The Atlanta Journal-Constitution in an email that Ladner must also perform 600 hours of community service and pay $6,000 in restitution to Cherokee County.

The former Holly Springs police officer was convicted in May of six counts of making a false statement related to his use of the honor to get free license plates.

The Cherokee County Sheriff’s Office conducted a six-week investigation into Ladner’s Purple Heart claims in 2013, after he and his wife were injured during a wounded veterans’ parade in Texas, drawing national attention.