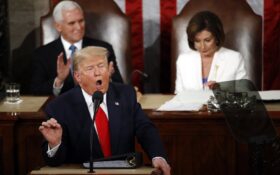 A day before the New York primary election, Rep. Alexandria Ocasio-Cortez got a vote of confidence from the most unlikely politician in Washington, D.C.

The commander piggybacked off a Washington Times report that Ocasio-Cortez is being “pushed” to challenge Senate Minority leader Chuck Schumer, D-N.Y.

And Trump agreed, calling the prospective 2022 victory “a big improvement” should AOC win.

Actually, that would be a big improvement – and she would win! https://t.co/EzmOjNtYJS

Trump’s outspoken opinion responds directly to rumors that Ocasio-Cortez has put a target on the back of rank and file leadership — and those in far-left circles say Schumer won’t be spared.

Establishment Democrats have come to fear the threat of Ocasio-Cortez ever since her 2018 upset victory.

And far-left socialists are looking to capitalize with a social media superstar on Capitol Hill.

They’d like her to pick up where Sen. Bernie Sanders, I-Vt. left off.

A former Sanders campaign aide said: “The fastest way to speed up the process of changing the corrupt, do-nothing, status-quo-protecting culture of the national Democratic Party is for @AOC to defeat @ChuckSchumer in a Democratic primary in 2022.”

Sounds like the same thing Trump is getting rid of — draining the swamp.

Of course he and Ocasio-Cortez have very different political messages, but critics have noted similarities in their styles of politics. They both launched into Congress promising to run the establishment politicians out of town.

The move has so far sowed division.

AOC has convinced prominent Democrats to endorse the challenger, while others — like Schumer — doubled down on the incumbent.

It’s clear that Ocasio-Cortez and Schumer don’t see eye to eye, and Trump knows this.

As much as Trump is the president, he’s also in the business of predictions.

Back in February he guessed that AOC would launch a primary challenge against Schumer due to the poor results Democrats yielded in the impeachment battle — and with this latest report, it looks like he’s not the only one who sees the writing on the wall.