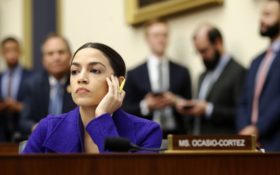 New York Democrats will hold their primary elections on Tuesday and some Democrats are receiving endorsements from, of all people, former President Donald Trump.

Alexandria Ocasio-Cortez, who some call AOC for short, is again running for Congress, NY-14, and I am thrilled to give her my Endorsement. Even though every one of her ideas, such as the Green New Deal, are terrible and would be a disaster for America, AOC is a great addition to Congress. We need a few more AOCs in Congress, if we’re being completely honest. Many people are saying that she should consider going blonde, and after seeing that picture, I have to agree. Take it from me, Alexandria, blondes have more fun!

Blonde AOC does not approve pic.twitter.com/CDz0NL59eb

I poured gasoline all over my house when I found out and read that Trump endorsed AOC https://t.co/akyrufwbCn

On Truth Social, Trump also endorsed former federal prosecutor Dan Goldman in the crowded race for the Democratic nomination in the 10th district.

In the endorsement, Trump mentioned Goldman’s work as lead majority counsel in the first impeachment… and as lead counsel to House Managers in the second impeachment.

Earlier, The New York Times had endorsed Goldman without any sarcasm, citing Goldman’s work on the impeachment committee. After the endorsement, the Times faced criticism due to the longtime, personal relationship between Goldman and A. G. Sulzberger, the paper’s publisher.

I’m coming for you, Donald. pic.twitter.com/qCxxykBBRJ

Due to redistricting, Maloney is running against Democrat Rep. Jerry Nadler. Maloney is polling well behind Nadler in the incumbent-on-incumbent race. According to a new poll by The Hill, Maloney is careening toward a landslide defeat.

Maloney chaired the House Oversight Committee during an impeachment. After the sarcastic endorsement, she went on Twitter to slam Trump and sexist and to reject the endorsement.

He should be more concerned about the investigation I’m leading as Chair of the Oversight Committee into the storage of his classified documents at Mar-a-Lago.

As chair of one of the most powerful committees in Congress he knows I won’t stop holding him accountable for his actions.

Ocasio-Cortez has yet to respond publicly.