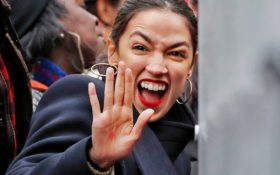 Rep. Alexandria Ocasio-Cortez, D-N.Y. has been dominating the mainstream media headlines over rifts with House Speaker Nancy Pelosi, D-Calif. and the rest of the establishment Democrats.

But there’s a backlash coming against Ocasio-Cortez — and it’s a fight she’s very likely to lose.

A pair of lawmakers — one Democrat and one Republican — are both filing a lawsuit against Ocasio-Cortez for blocking them on the social media platform Twitter. Blocking is way for many high profile Twitter users to hide and ignore criticisms.

Many see this as an attack on the First Amendment.

Joseph Saladino, a GOP member running for Congress in a district of New York City, took to Twitter to announce that he was suing the former bartender.

“I have officially filed my lawsuit against AOC for blocking me on twitter,” he wrote. “[President Donald Trump] is not allowed to block people, will the standards apply equally? Stay tuned to find out!”

I have officially filed my lawsuit against AOC for blocking me on twitter.
Trump is not allowed to block people, will the standards apply equally?
Stay tuned to find out! pic.twitter.com/0RmHI7x9Qc

Her days of Twitter games are fast coming to a close — her court date is likely to come sooner rather than later.

“If we can’t talk to one another, the whole system breaks down,” Saladino wrote in his press release about the lawsuit. “Look what is happening in my district when entrenched NeverTrumpers are confronted by America First ideas. Like it or not we live in the same city and we need to be professional.”