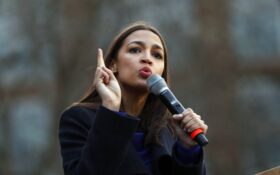 On the defensive for the first time in her career, Ocasio-Cortez’ office announced she’s going to skip the upcoming in-person debate with her challengers on Wednesday.

“Ocasio-Cortez is claiming her incumbency privilege,” Parkchester Times publisher Sheikh Musa Drammeh said to The New York Post. “But if she does the same thing, history will repeat itself.”

In a statement, Ocasio-Cortez falsely claimed that an in-person debate would violate New York’s rules on social distancing.

However, AOC spent Sunday hosting a graduation party in a church parking lot Sunday that had a cookout, balloon entertainers on hand, and a DJ. Critics pointed out that Ocasio-Cortez’ campaign event was held at an active early voting site, a clear violation of election law.

Her foe Caruso-Cabrera used the last debate to coin the phrase, “AOC is MIA” — and her plans to skip the last debate before the primary has AOC’s opponents on the attack.

“AOC directly violated the election law. She doesn’t pay her taxes. She said yes to a salary increase. Who wants this type of person in Congress when we’re all in trouble?” her spokesman asked.