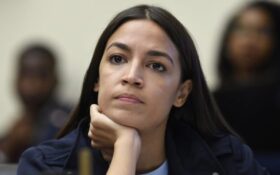 Rep. Alexandria Ocasio-Cortez, D-N.Y., is not normally one to back away from a fight — but after her false claim that White House Press Secretary Kayleigh McEnany was being racist towards her was quickly debunked, AOC has avoided responding to her critics.

Ocasio-Cortez blasted McEnany, saying the press secretary was being racist and degrading by misusing her official title.

The @PressSec comment is steeped in a long, hurtful, & horrendous history of stripping women of color of titles and diminishing them to “the help.”

Perhaps she isn’t aware that what she did is mired in racist history. If that is the case, I look forward to her apology tomorrow.

There’s only one problem — Ocasio-Cortez didn’t read the actual statement McEnany put out.

McEnany had pointed out that Ocasio-Cortez and others wanting to defund police departments across the country were congresswomen — and in AOC’s case, also an adviser to Biden.

Indeed, Ocasio-Cortez works as an adviser on the Biden campaign as a co-chairwoman on his panel addressing climate change.

As always, McEnany was prepared.

The press secretary had the actual White House transcripts ready to show AOC.

If anyone is wondering whether or not the education system still works – @aoc has an economics degree.

.@PressSec: “The President is appalled by the ‘Defund the Police’ Movement.” pic.twitter.com/QdbQC0cV3a

As of the time of publishing, Ocasio-Cortez had remained completely silent.

She had not yet apologized to McEnany, nor replied to critics.