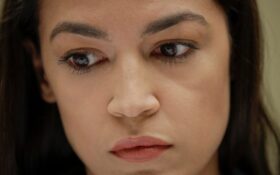 What she’s saying is wrong, of course… but being wrong and uninformed has never stopped Ocasio-Cortez in the past. Why start now?

“People who say, ‘Oh, but you know…’” Ocasio-Cortez’ video starts. She makes air quotes with her fingers but struggles to complete her thought.

“Our Jewish brothers and sisters? They are able to have an abortion, according to their faith,” Ocasio-Cortez claimed.

In Judaism, abortions are allowed almost only in extreme cases where the life of the mother would be at risk.

“Ya know… there are so many faiths!” she said on the video. “That… do not have the same definition of life as fundamentalist Christians.”

She fails to name a single one and struggles to complete her thoughts.

“It’s ridiculous,” she said. “And it is… it’s… it is theocratic. It’s authoritarian. It is wrong.”

Take a look below.

Warning: This will make you roll your eyes.

Rep. Ocasio-Cortez (D) on Abortion: "There are many faiths that do not have the same definition of 'life' as fundamentalist Christians. What about their rights?"

"It is theocratic. It's authoritarian. It is wrong." pic.twitter.com/3vVbKB55uh