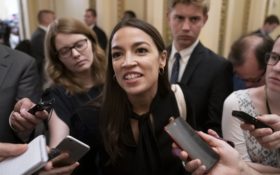 It wasn’t along the campaign trail.

Nor did she make a friend in another one of her crazed liberal supporters.

Ocasio-Cortez, on her congressional vacation, took some time to recharge by befriending a penguin.

“A new day, a new friends,” she wrote on Twitter.

The video accompanying the post shows AOC at what is most likely a zoo, running back and forth in front of a penguin which is following her.

And once she posted a video of her “dancing” with it, Twitter users quickly jumped all over her for the stunt. With a post like this, she was begging for it.

Here are some of the best responses below:

Perhaps the most scathing came from one user who suggested that the penguin following AOC around had more brains than her.

“Has more intelligence then you,” he wrote.

Has more intelligence then you ????

“GO TO WORK!” he wrote. “Answer your phones or something.”

That comment in particular might have been in reference to reports that Ocasio-Cortez, nor any of her representatives, don’t answer her office phone — and she’s the only one out of 13 lawmakers in New York City who doesn’t bother to pick up.

The New York Post claimed that every other legislator in the city had a real human being answering the phone.

Perhaps it’s the reason why she befriends penguins who can’t challenge her politically.

GO TO WORK! Answer your phones or something.

One Twitter user hilariously hit Ocasio-Cortez where it hurts — her politics, making a wise crack at the expense of the Democrats’ costly, socialist plans for America.

“Now the penguin’s taxes are going up.”

Now the penguin's taxes are going up

Ocasio-Cortez made the newfound friend from the environment at a very ironic time.